Called the “wolf of the sea” in many European locations, the branzino fish is one of the seafood staples of the continent. So, what is branzino? While branzino is just the Italian variation of the fish’s name, I find myself calling it by this Italian nomenclature because “Mediterranean sea bass” lacks a bit of the allure, and this special fish fits such a grand-sounding name.

If you’ve ever had lavaraki, levrek, or the German Europäischer Wolfsbarsch, then you’ve tried the fish.

Still, on this side of the Atlantic, many have yet to try this fish and all of the dishes that can be made from it, which is why I’ve created this guide.

So, what’s so special about the iconic branzino taste?

Well, this fish is known for its almost sweet flavor, and the meat of the branzino is very delicate. In my experience, almost all recipes that use this fish virtually fall apart in the mouth. 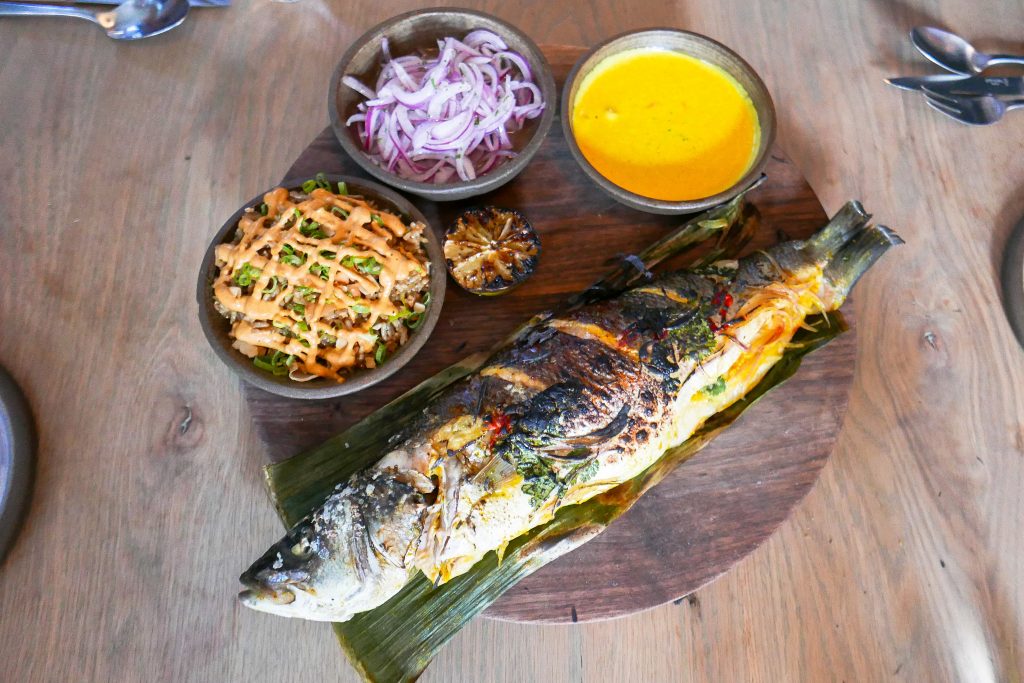 There’s a distinct reason why the Mediterranean sea bass is called the wolf of the sea; the fish is fairly ravenous and eats fish and shellfish as a major part of its diet. The fish is also known for its adaptability; it can survive and flourish in waters that are as cold as 41 degrees Fahrenheit.

This can also be a very large fish; the current record holder was a branzino that was over three feet long. As you can see, if you’re looking for a fish that’s big enough to settle an appetite, there’s more than enough meat on this bass. In fact, tradition states that the branzino should be eaten whole, which makes it a great fish to eat fresh off the grill or right out of the oven.

When you’re out there looking for this fish, it’s important to understand that the plural of branzino is branzini, so ask for that when you’re buying several fish.

How to Eat Branzino

As I mentioned previously, the most common way to eat this Mediterranean fish is to eat it whole save for some parts of the head and tail. This style of eating fish isn’t as common in the States as it is in Europe, so let me outline the step-by-step process of eating your branzino:

The Unique Branzino Taste: The Skin

Many people discard the skin of their fish, and as you may have noticed, I even mentioned peeling back the skin on branzino in my ‘How to Eat Branzino‘ section. In actuality, if you prepare the fish correctly, you can eat it skin and all. Branzino is one of those types of fish that you can sear the skin until it’s nice and crisp, so let me show you how to do it.

Before I start, it’s essential that you prepare your branzino in a very hot skillet so that the fish won’t break apart during preparation. Also, this isn’t a recipe for cooking whole branzino, so if you have bought it that way from your local market, you should remove the head, innards, and tail of the bass before you start. 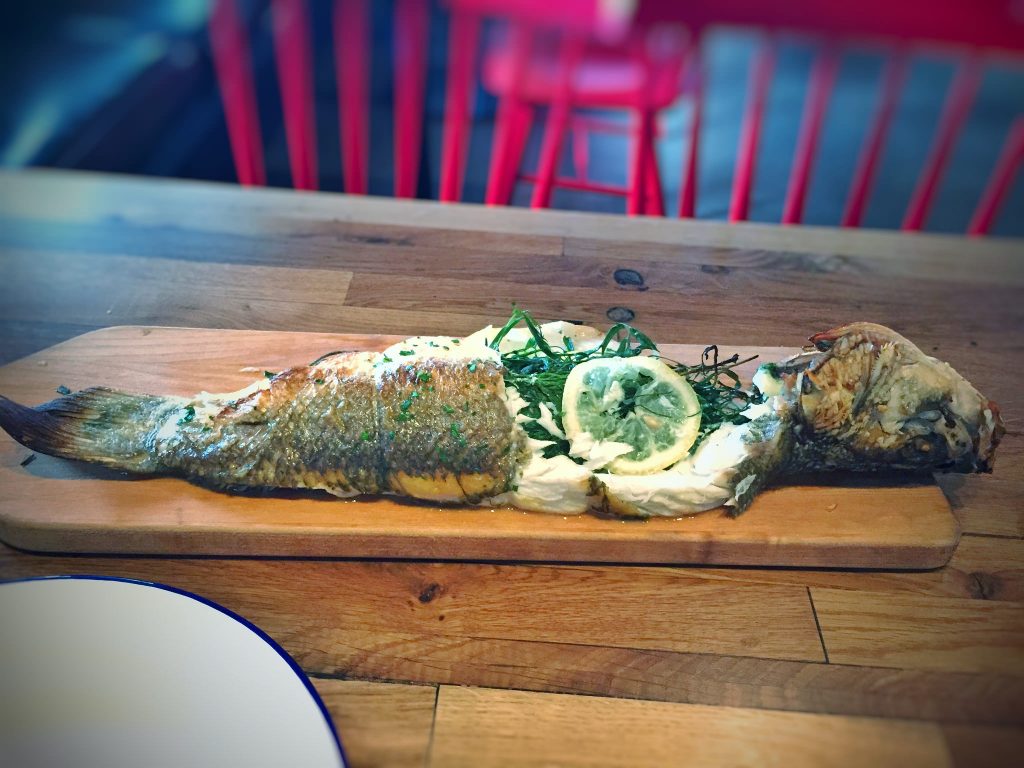 To start, heat a skillet with the oil over high heat for about 30 seconds so that the oil is piping hot. Gently salt and pepper the entire surface area of the fish and rub the seasoning into the flesh.

While you’ll most likely have two slices of branzino, it’s a good idea to put them together for this recipe so that the meat is weighed down somewhat. Once the fish is together, place it via spatula into the skillet. At this point, if you want to avoid the meat curling up, you should apply even pressure to the outside of the fish with a spatula.

The fish should be cooked on one side after about a minute, so flip the fish and add the butter and the fennel pollen into the skillet. Cook this side of the fish for about an additional while making sure to coat it with the butter and fennel pollen while it cooks so that the flavors meld. After another three minutes, your branzino should be fully cooked, and the skin will be crispy and scrumptious. Serve immediately.

One of the coolest aspects of branzino is the fact that you can usually find the whole fish at your local fish market if you know where to look. Once you have your whole fish, you can opt to have your fishmonger degut and de-scale the fish, or you can opt to do this at home. In any situation, once this is done, the process of preparation is very easy. 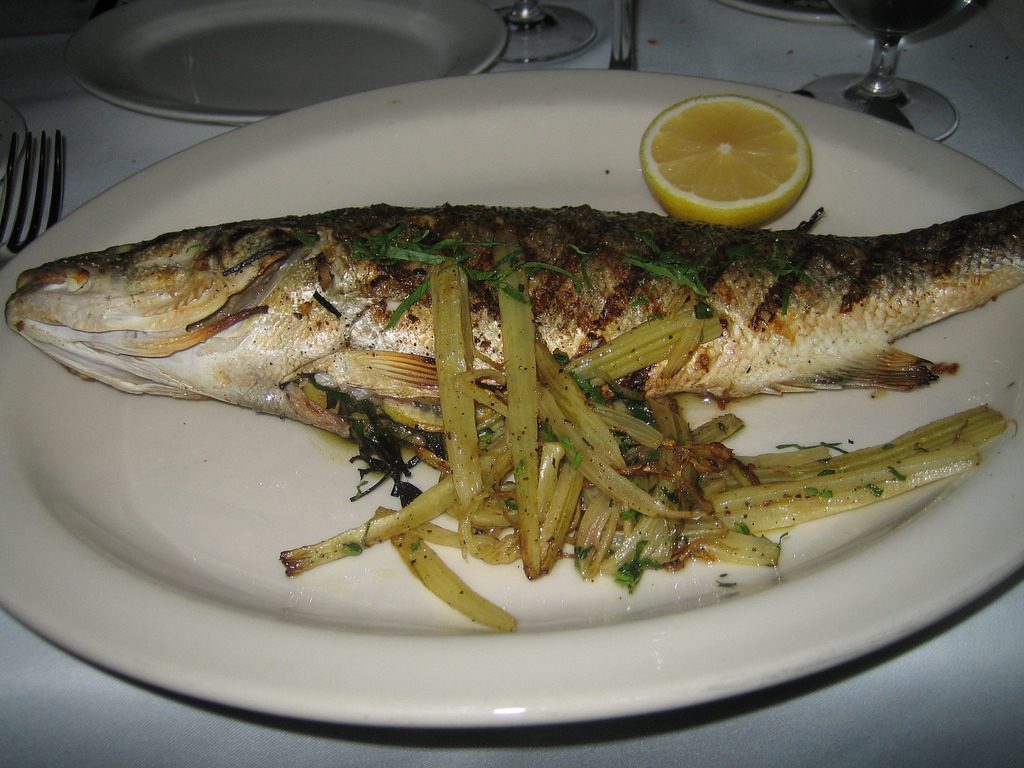 As you’ll notice by now, I haven’t been very precise with the ingredients. This is because the amount of salt, oil, and herbs will vary based on the size of the fish, so don’t worry about measuring out amounts of these ingredients.

Personally, I like to use fennel seeds to line my cooking pan as well.

Place your fish atop a shallow cooking pan and proceed to drizzle the fish with olive oil. Once drizzled, use your fingers to really work the oil into the fish. Sprinkle some more salt atop the fish in the pan. Place the fish into a preheated oven at 450 degrees Fahrenheit, and cook the branzino for about 20 minutes. Once this is done, you can opt to debone the fish or remove the stuffing. Once it’s ready, serve immediately.

Preparing the fish whole can be very rewarding, but what about more exotic variations of this seafood dish? In this part of the guide, I’m going to show you how to make branzino in two great ways: citrus-stuffed and grilled.

Debone and de-scale the branzini. Apply a liberal layer of salt and pepper to the skin and cavity of each fish. Next, proceed to stuff the cavities with the lemon, orange, lime, garlic, cilantro, and parsley. Sprinkle the fish with fennel. With butcher’s twine, tie the fish in three areas so that they remain closed during the cooking process.

Sprinkle or rub olive oil over the body of the wrapped fish so that there’s a slick coating. Cook the fish in the large skillet for about five minutes each side. When it’s done, the skin should be slightly brown, and it will feel fairly firm. Serve immediately.

This recipe calls for the simple grilling of the branzino fillet. When I make this recipe, I typically do all of the cutting myself, which means that I remove the head, innards, tail, and bones from the fish so that I have just the meat. If you’re of the “waste not, want not” mode of thinking, then the head can be reused in soups and other dishes. 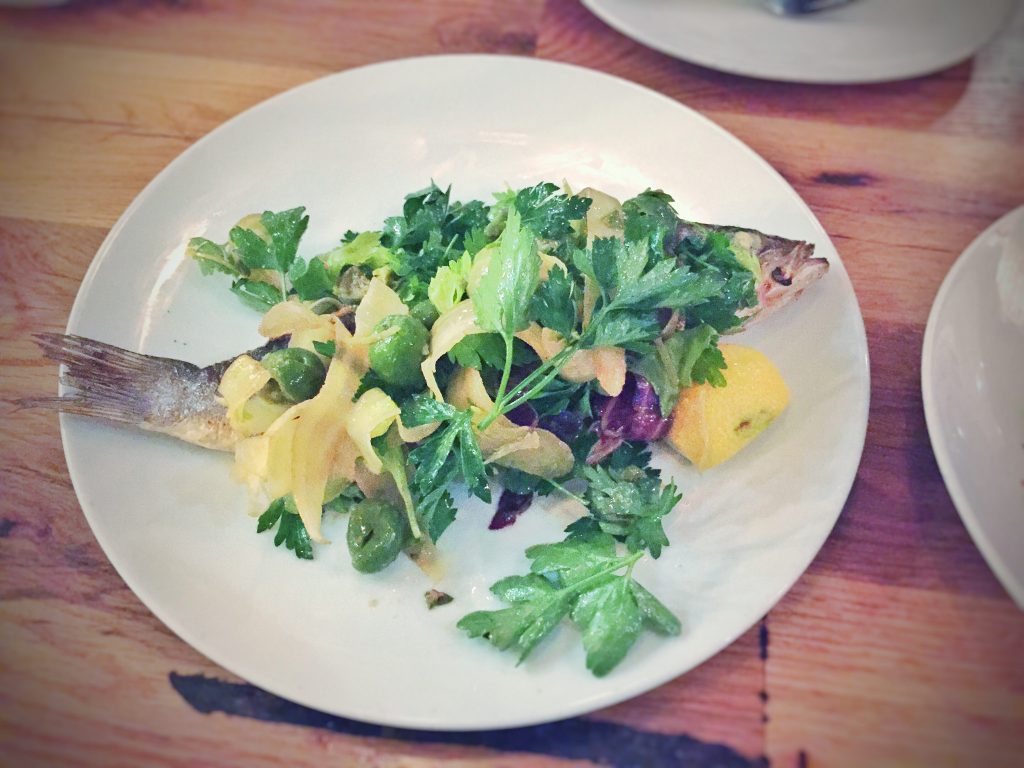 Start by rubbing the olive oil and salt and pepper into the flesh of your fish. Next, preheat the grill until it has a very high heat – typically, I use a cooking thermometer, and I wait for the grill to reach at least 400 degrees Fahrenheit. Once the grill is heated, use a sharp knife to cut two or three slashes into the body of the fish – these will help the fish cook quicker and take on some of the flavors of the vinaigrette.

Lay the fish on the oiled grilling surface and cover.

Cook like this for about five minutes. While this is cooking, make your vinaigrette by combining into a large jar the olive oil, lemon zest, vinegar, onion, capers, tarragon, salt and pepper, and parsley. Once all of the ingredients are in the jar, shake it vigorously.

Once the fish is done cooking (the skin should be crispy and browned), pour the vinaigrette on top and serve immediately.

Now that you can answer the question, “What is branzino?” try to find it at your local fishmonger. I hope that you enjoyed my guide on the Mediterranean fish branzino – it’s truly worthy of the popularity it’s gained over the past few years. Whether you’re enjoying stuffed branzino or grilled branzino,this Italian white fish is sure to please you and your family. 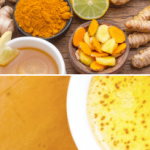 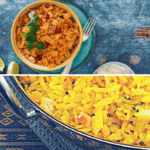