I was at a sushi bar in Los Angeles perhaps two years ago when I witnessed a particularly embarrassing interaction. A woman was talking to one of the chefs (who spoke very good English) and she forced the poor man to explain in great detail what all of the ingredients in her sushi roll were. She wasn’t content with normal explanations, either. Instead, she demanded that he describe all of the ingredients in simple English terms — seaweed instead of nori and so forth. When he tried to define gobo, however, she refused to believe him.

“It’s a carrot,” she said, bewildered. “You know what a carrot is, right?”

She maintained this stance for what must have been several minutes. There was an older couple to her left that joined the chef in attempting to explain that no, gobo is actually a different root vegetable called burdock root and that yamagobo orange because of dye used during the pickling process. She persisted, however, in her insistence that she was eating carrots. 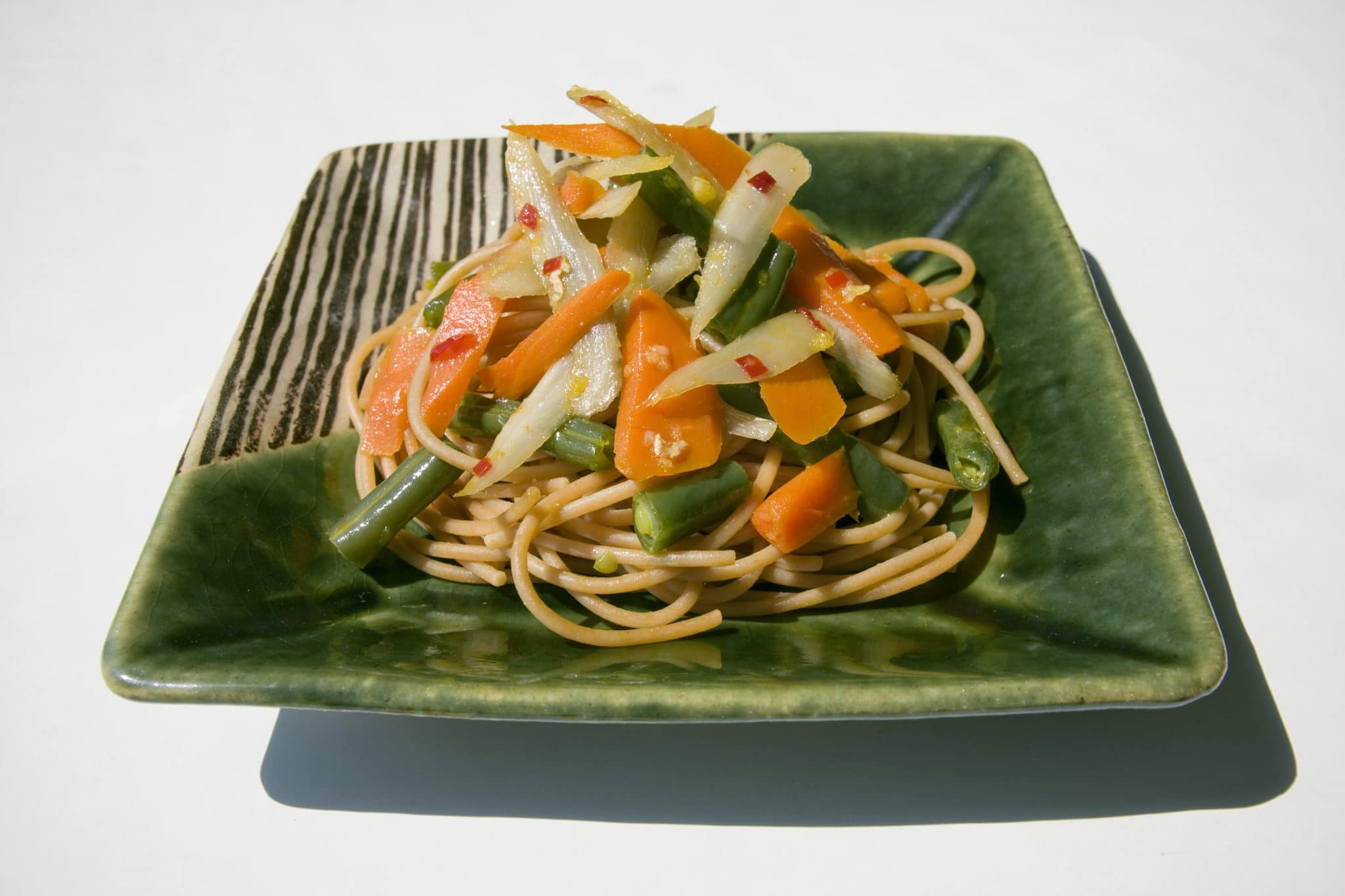 In her defense, she was somewhat drunk, and while the entire interaction was incredibly embarrassing and rude, it never was outright offensive. Instead, she put her ignorance on display for the small dinner crowd that happened to be near her. I imagine that the rest of the people there have vivid memories of her disdainfully shaking her head as she asked person after person to take her side and convince the chefs that they were actually serving carrot. None of us did.
As a result of that evening, I am now extraordinarily well educated in all things related to gobo and yamagobo. Here’s a rundown on everything that you could possibly want to know about this fairly uninteresting vegetable.

Yamagobo (sometimes romanized as yama gobo or yamagobou) is a term for pickled burdock root. The root itself is referred to as gobo (or gobou) in Japan, Yamagobo is pickled in a salty, acidic, and sweet solution until it develops a delicate yet distinctive flavor that goes very well with carrots, pork, and several sushi fillers. While gobo is found in similar forms in many Japanese dishes, the orange picked form of the root is best known for going inside different kinds of sushi rolls.

What Is Gobo? What’s Burdock Root? 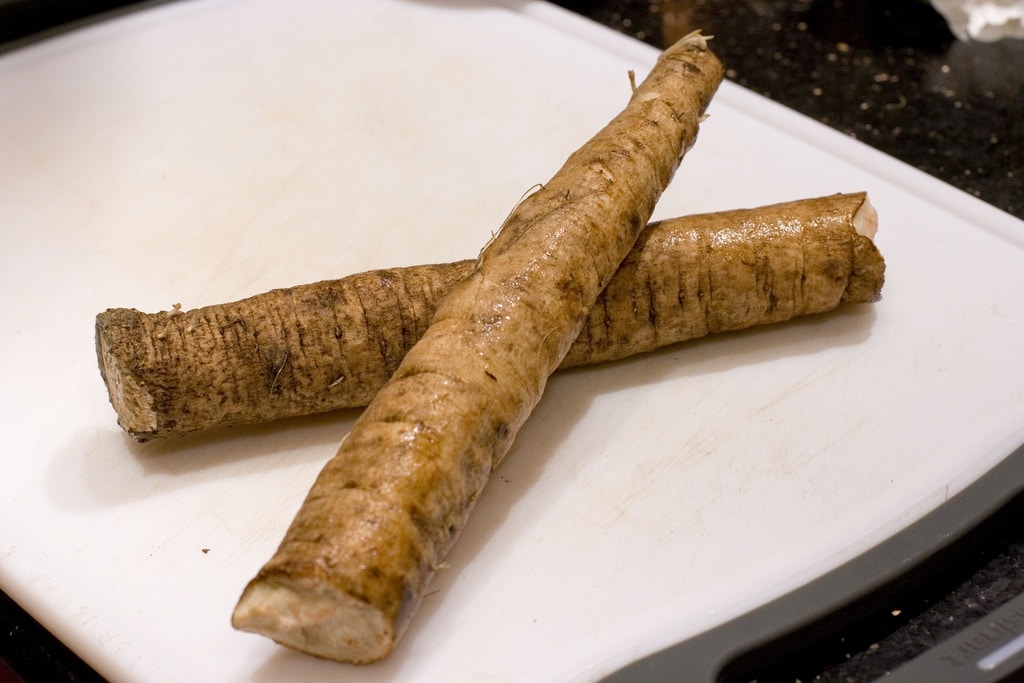 Burdock is a large plant that’s related to both sunflowers and artichokes. It physically resembles a weed, with spiny leaves and purple stems. It’s not a particularly pleasant plant as far as aesthetics go, and it’s actually harmful to both people and animals due to the fine hairs that it grows on the outside of its fruit. Luckily, you don’t have to worry about any of this when you buy burdock root at the store or enjoy yamagobo in your sushi.

The roots themselves are enjoyed all around the world. Conveniently, the burdock plant grows easily just about anywhere, meaning you can probably find a local source for all of your yamagobo needs.

Yamagobo is usually sold pre-packaged, pre-pickled, and ready to eat. You can simply open up your bag of pre-prepared, pre-sliced roots and enjoy them on their own or as part of a dish. If you pick up raw, natural burdock root (gobo), however, you’ll need to do a bit more to eat it.

The first thing you’ll want to do is shred the burdock root or slice it into very thin strips. There’s a good reason for this style of presentation: it increases the surface area of the root. Burdock is quite harsh and is almost always soaked in warm water for several minutes in order to let some of the excessive earthy flavors and tannins leach out before you eat it. By cutting it up before you do this, you can get out more of the unpleasantness in less time. 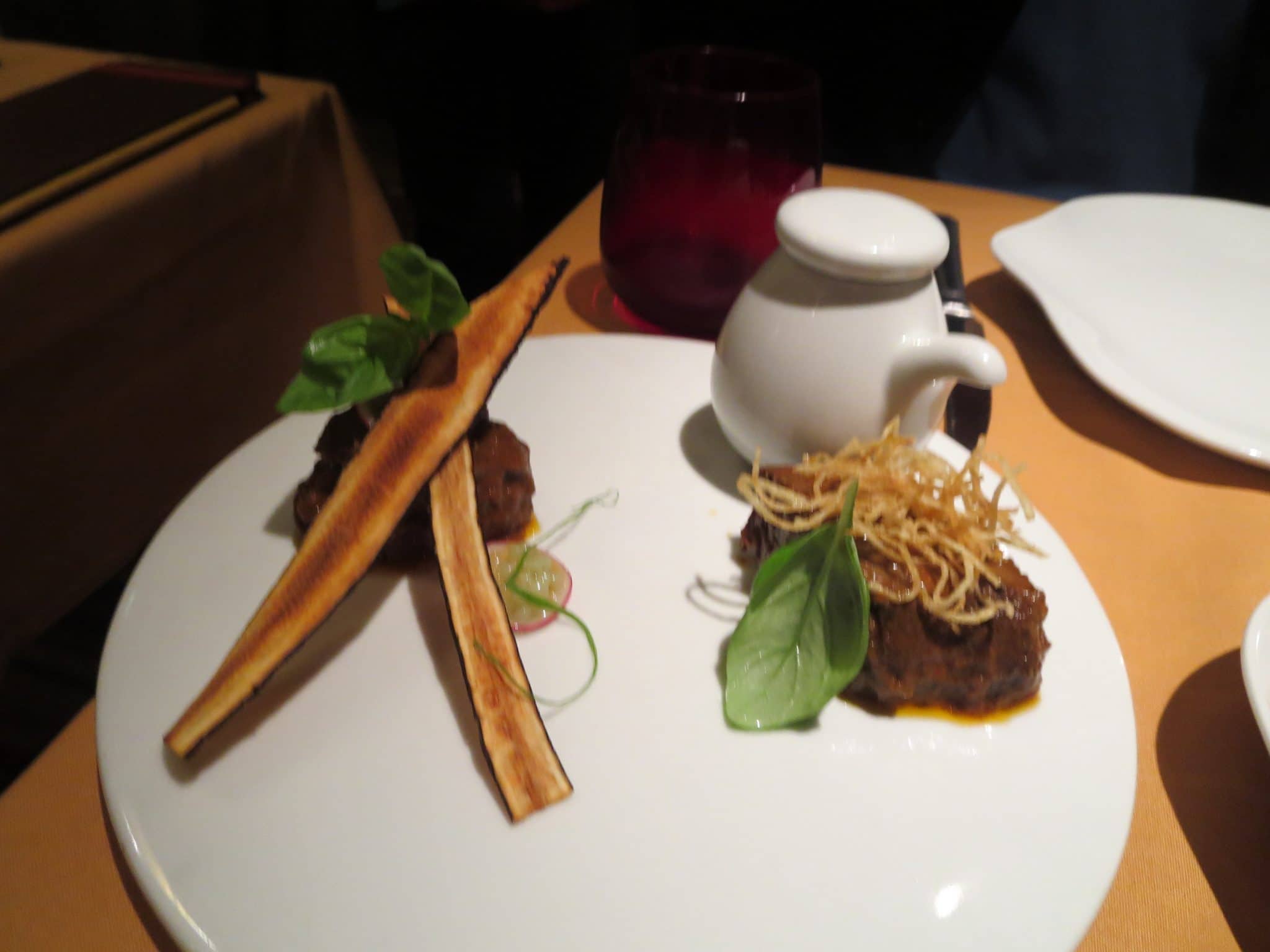 Once you’ve soaked your burdock to the point where it’s edible, it’s time to decide how you want to use it. Japanese dishes often incorporate a small amount of burdock as a seasoning. You might add it to a soup, a rice dish, or another flavorful recipe that needs a little bit of a kick. In this case, you might not want to soak your burdock quite as long. You won’t need to season the root itself, either, since it’s being used as a seasoning in a different dish.

The other common way to enjoy burdock is as a core ingredient in a salad. Gobo salad is usually made with a potent dressing containing soy sauce, sugar, sesame oil, and sake, mirin, or wine. This ingredient list is quite similar to the chemicals used to pickle yamagobo! In other words, you can save time and get a very “authentic” Japanese taste by simply using yamagobo instead of raw root in your salad.

If you’re making a gobo salad yourself, consider soaking the burdock in dressing for a few minutes before you serve it. Recipes often suggest letting the flavors in the dressing and the gobo itself blend together for at least thirty minutes. Gobo is usually paired with carrots, turnips, and other root vegetables. 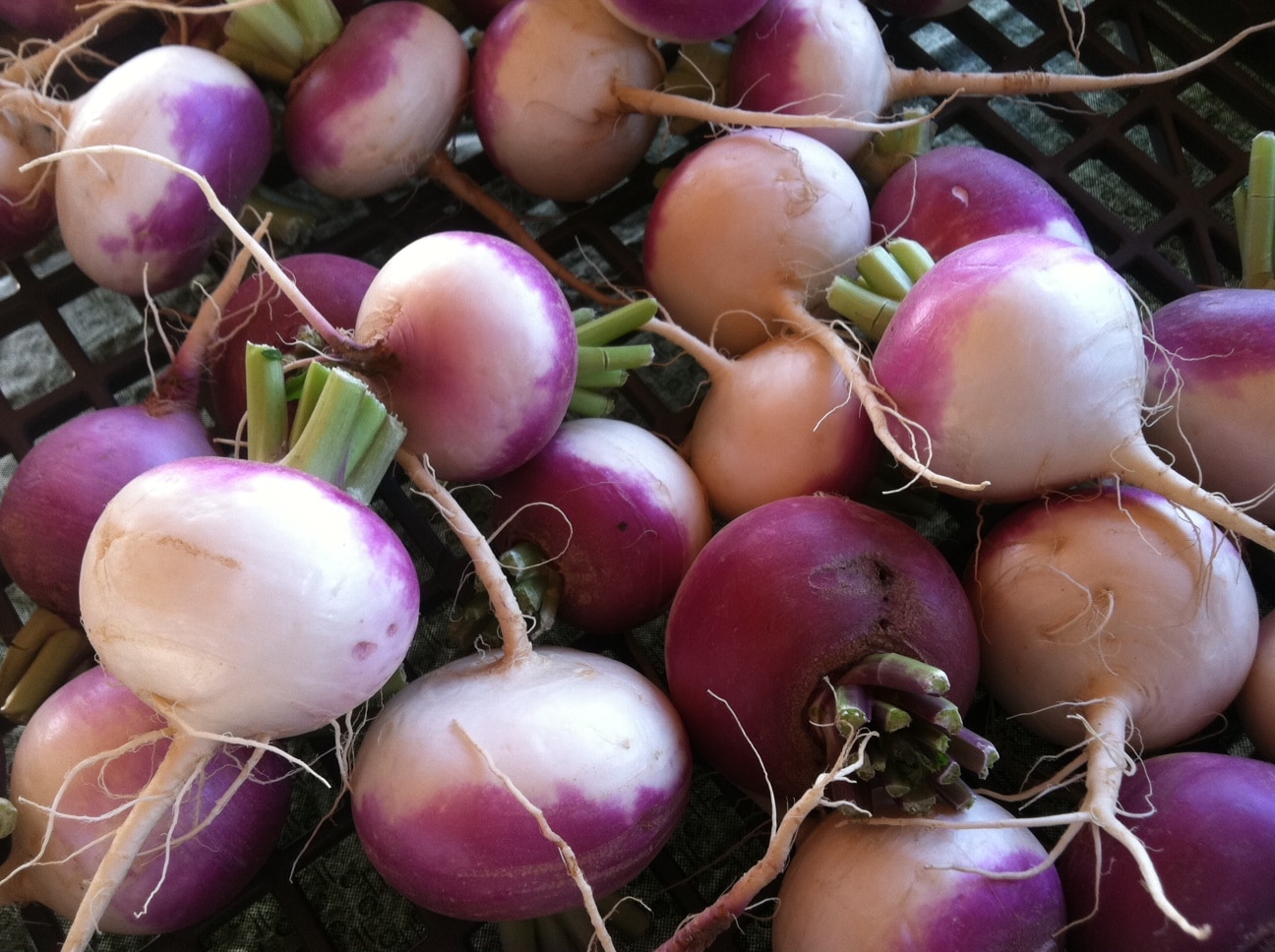 Yamagobo is not just carrots. It’s got a very distinct flavor that’s quite unique. This means that your savvy guests will know quite quickly that you substituted something for this particular root vegetable.

This isn’t to say that you can’t make a tasty gobo-themed salad or your favorite sushi rolls without any yamagobo. Instead, you’ll simply make a dish that tastes a bit different. Here are three of my favorite easily available things to substitute for both yamagobo and gobo.

Gobo salads almost always include both carrots and turnips due to how well the flavors blend together. While you and your dinner guests will notice the lack of yamagobo, turnips will still remind them of how gobo tastes. Ideally, you’ll replace yamagobo with pickled turnips or at least soak your turnips in a pickling solution for a bit before you serve them if you’re making rolls. 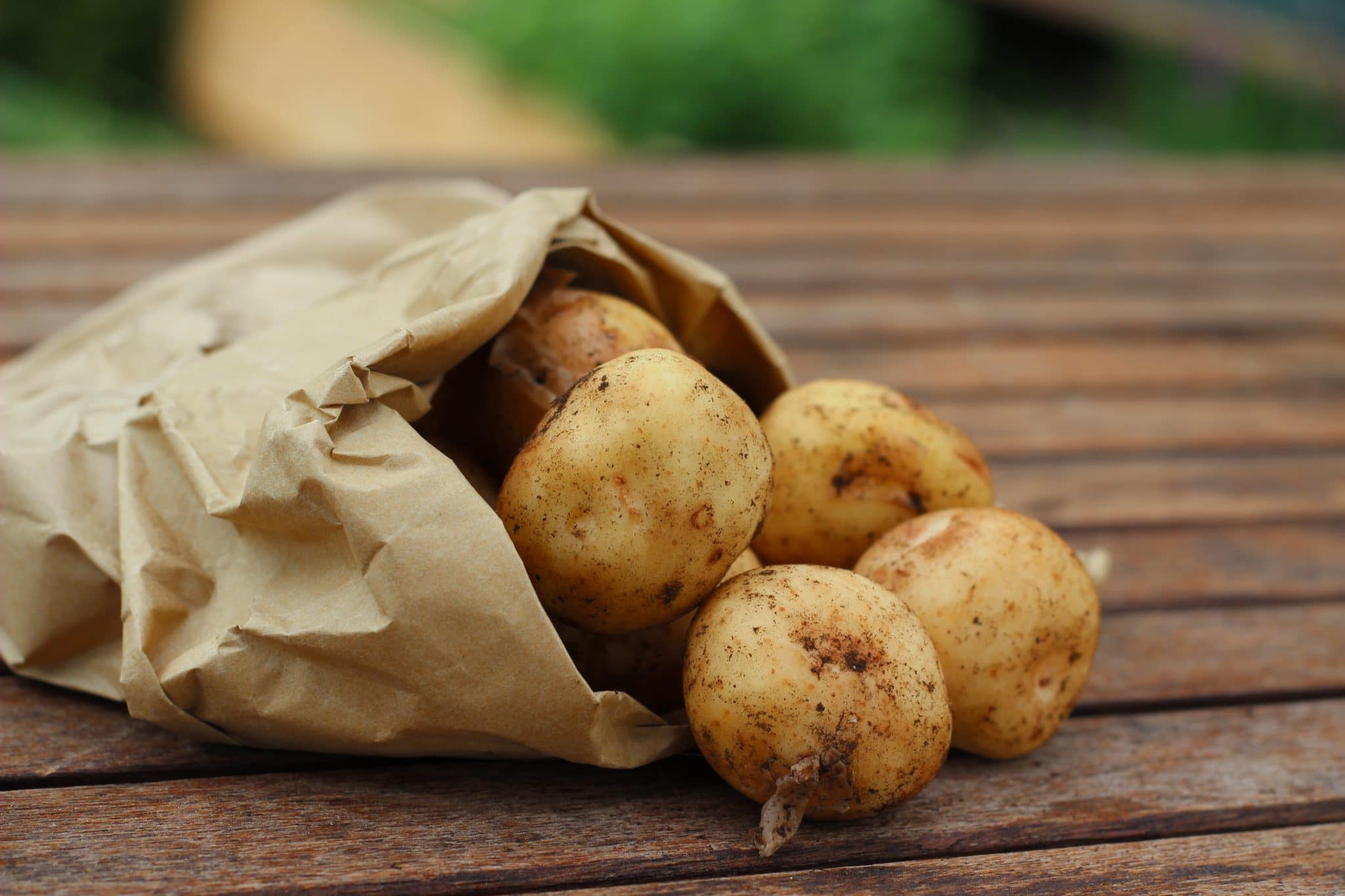 Yamagobo looks a lot like a carrot. While carrots are quite different taste wise, you can find pickled carrots that offer a decent amount of kick to distract you and your friends from the lack of gobo. Just like with turnips, carrots are quite complementary, so people familiar with gobo dishes will be used to eating carrots and turnips in whatever recipe you choose.

Jicama is pretty different from yamagobo as far as both taste and texture go. So why does it make my top three? It’s totally non-threatening and serves as an excellent vehicle for seasoning. This means that dipping some jicama into a solution of rice vinegar, soy sauce, and sugar will be much more effective than “pickling” a turnip for a similarly small amount of time. If you want a root vegetable to serve as an accessible vehicle for your dressing, jicama is one of the best choices.

Where Can I Buy Gobo, Yamagobo, and Burdock Root?

Burdock root is readily available at stores like Trader Joe’s, Whole Foods, and other national market chains. Yamagobo is available in some stores, but you can also buy it in small packages online for a fairly low price. It’s pickled, meaning that you don’t have to worry about it being “fresh.”

The classic presentation for yamagobo is in one of several types of sushi rolls. You can make these yourself if you’re familiar with sushi preparation. Here’s a quick rundown on how to make futomaki, a type of vegetable sushi. 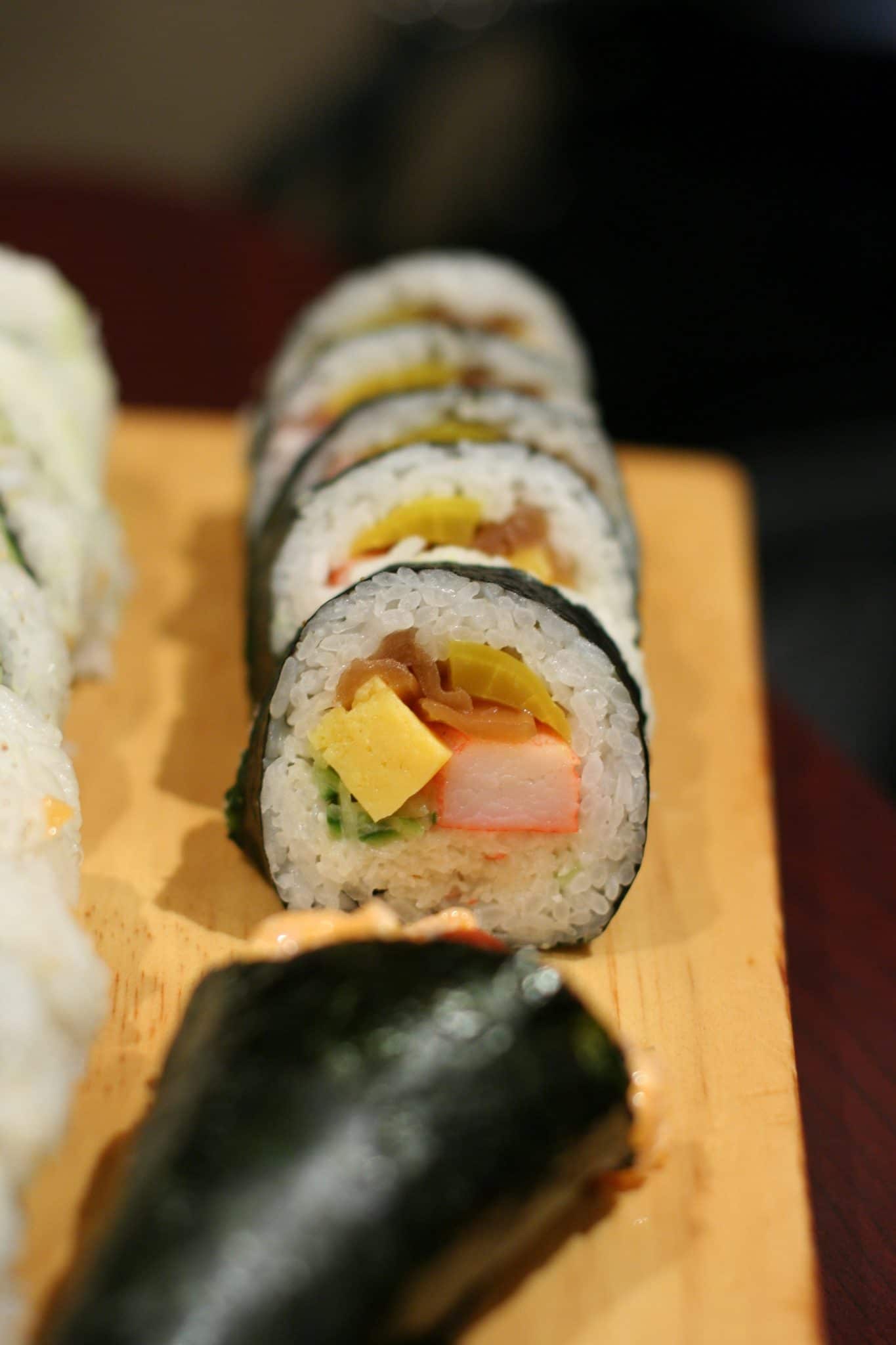 Slice any or all of these into thin strips so you can use them in rolls. Feel free to use other fillings if you’d prefer or omit any ingredients that you don’t have. 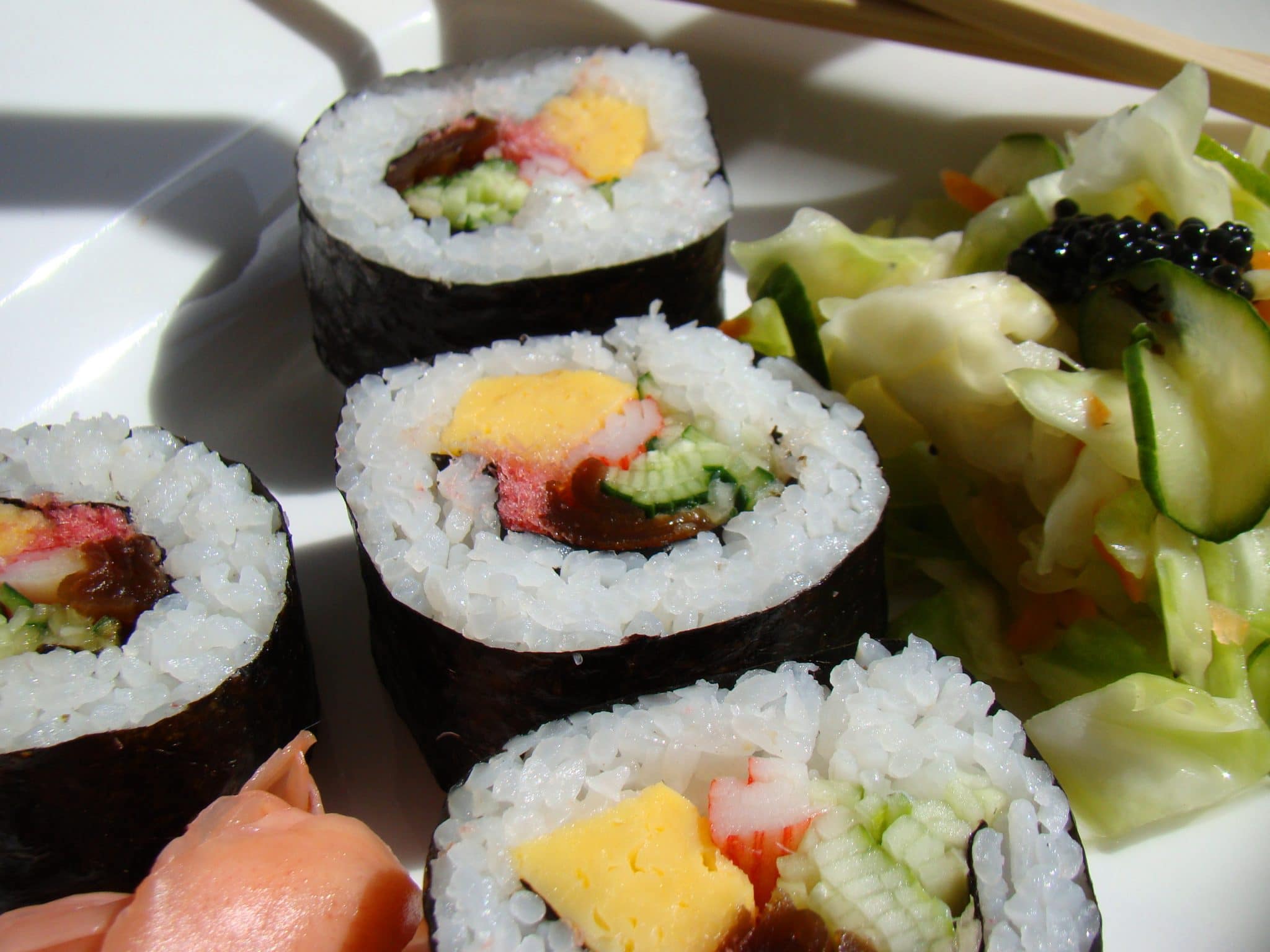 If you’re using kanpyo, wash it, coat it in salt, and then rinse it off. Bring a small saucepan full of water to a boil and cook the kanpyo for about 5 minutes. When it’s done, pour off most of the water and add the sugar and soy sauce.

Assemble your fillings and cut them into long, thin strips. This includes your yamagobo, kanpyo, cucumber, and avocado. The ideal size and shape is about 8″ long and between 1/4″ and 1/2 thick”. Don’t worry if your pieces aren’t long enough. You can simply place them together lengthwise to make up the full length of your roll.

Set up your sushi mat so you can roll it away from you. Put the nori on the mat, spread the sushi rice over the nori, and place the fillings inside. For me, this looks like one stock of kanpyo, one stick of yamagobo, one stick of cucumber, some avocado, the shrimp, and the tamagoyaki. Roll the mat up and tighten to complete your roll.

You’re all set! All you need to do is cut your sushi roll to enjoy futomaki made just the way you like it.

Other Uses For Burdock

Burdock root isn’t just used in Japanese cooking. In England, for example, it’s used as an ingredient in a soft drink along with dandelion. It’s also found in some mead and even used by nursing mothers as an herbal supplement. Burdock has recognized health benefits that include an abundance of potassium, calcium, and valuable amino acids. It’s not necessarily something you want to eat with every meal, but you will get a lot out of eating it every now and then! 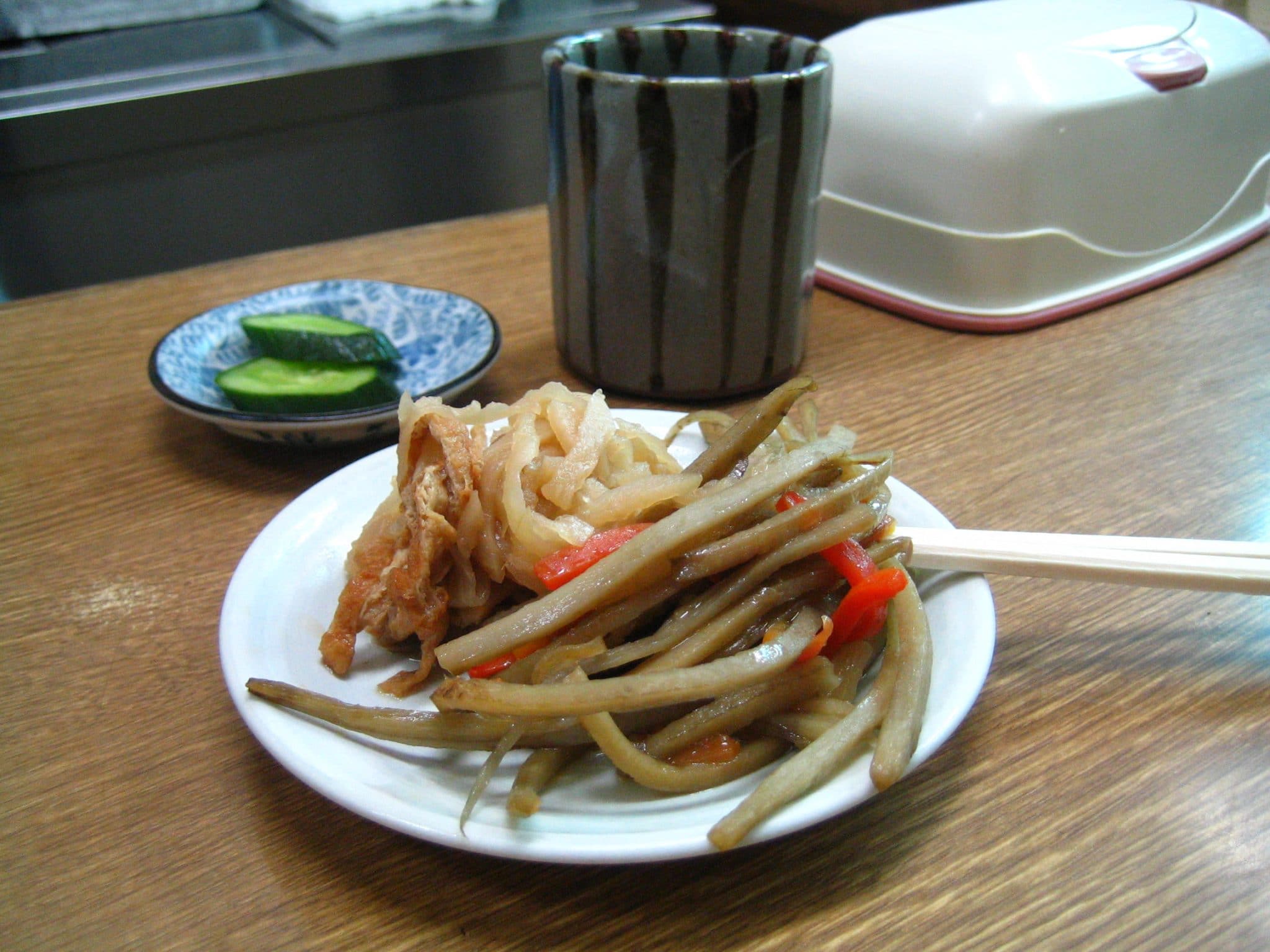 Yamagobo is a type of Japanese pickled burdock root. It’s traditionally used in sushi rolls to great effect due to its unique taste and crisp texture. While it looks like it’s made from carrot, this is simply because of orange dye used during the pickling process.

“Gobo” simply refers to burdock root in any form, not just pickled. Burdock root has a very strong, distinct flavor and is difficult to find true “substitutes” for. While there’s nothing wrong with using other root vegetables (like jicama, turnips, carrots, or even radishes), you’ll find that the resulting dishes are missing that unique burdock flavor. On the plus side, most dishes that use burdock root also use other root vegetables. In other words, you’re not really substituting in carrots or turnips as much as you are leaving out the burdock and adding more carrots or radishes than you normally would have.

Burdock root is available in its raw, unpickled form all around the world. You should be able to find some at a local market like Trader Joe’s or Whole Foods. If you’d like the orange, pickled version, you can usually find some at specialty Japanese shops or online. Since it’s pickled, it lasts for a long time. If you’re really not sure, ask around at your local sushi bar. They have to buy their yamagobo from someone!

The final verdict? The orange thing in your sushi rolls probably isn’t a carrot. If it has a distinct flavor that’s different from a normal carrot it’s probably yamagobo. This pickled root is a great way to add crunch and class to a wide variety of dishes, from sushi to sandwiches to salad. Be sure to experiment and add yamagobo to lots of foods to see what gets the most benefit from its unique flavor. 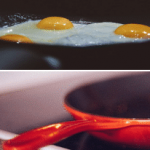 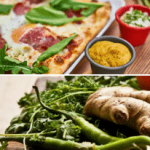 Substitute for Horseradish – What To Use Instead