Yellowtail sushi roll is a delicious preparation that incorporates a special fish found near Japan. Often misnamed “yellow tuna” or “yellowtail tuna” the fish used in this delicacy is actually Seriola quinqueradiata or amberjack. It is found in the Pacific Ocean from Japan to Hawaii. It is sometimes caught in the open ocean but is also farmed. The farms are located both in coastal areas and in deep sea areas.

What is Yellowtail Sushi

Yellowtail sushi is a sushi roll made from a specific kind of fish – yellowtail. Yellowtail or amberjack comes in different types, depending on the age and size of the fish and the location on the fish from which the pieces are taken. 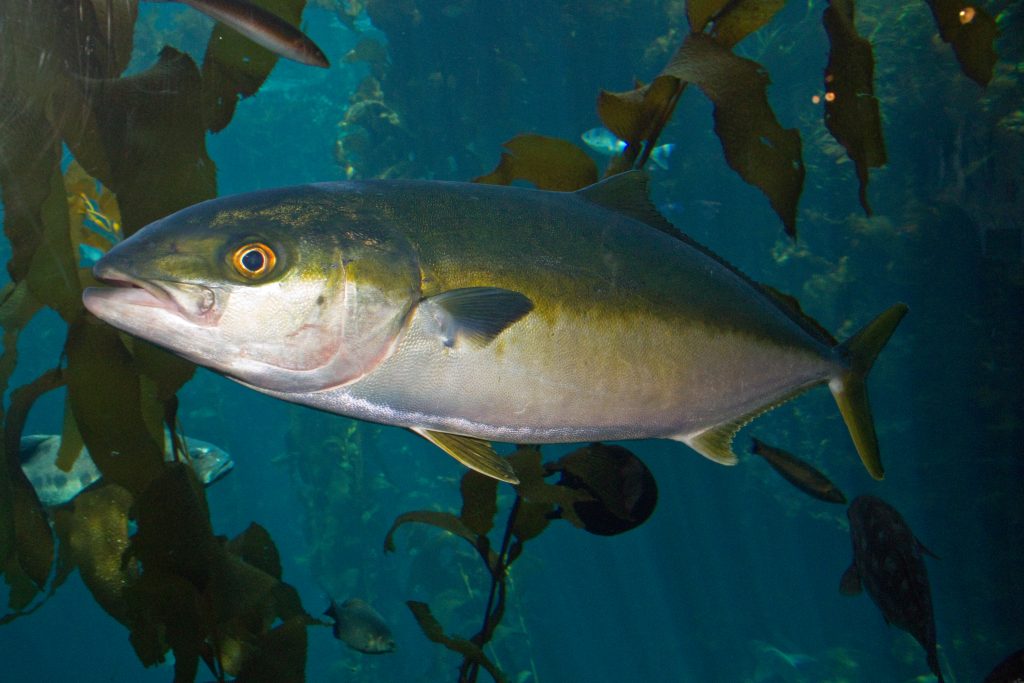 Hamachi, which is probably the best known in the western world, is from the upper part of young amberjack, fish that perhaps weigh eight pounds when they are harvested. Pieces taken from the lower part are called wakana. Next up is Kampachi, which is taken from the next size of yellowtail, and finally there is buri, which comes from the oldest and largest amberjack fish. If you are thinking this sounds like the three billy goats gruff – littlest, middlest, and biggest – you would have it about right.

The different types of fish are used in different ways. Hamachi, although it can be grilled or cooked in other ways, is often eaten as sashimi. While most readers will know about sashimi, for those who are not familiar with the term it is fish that is eaten raw, often with soy and wasabi sauces. It is also often incorporated into sushi rolls.

Kampachi is sometimes also eaten raw as kampachi tartare, but it can be grilled or baked. It is a good idea to keep in mind that it is a delicate fish and can easily be overcooked.

Buri refers to the size of the fish, but it also is used to indicate large, wild-caught yellowtail. It is considered a wintertime delicacy in Japan because the amberjack fish in those waters get amazingly fat at that time of year. It is used in sushi and sashimi and can also be roasted or grilled. 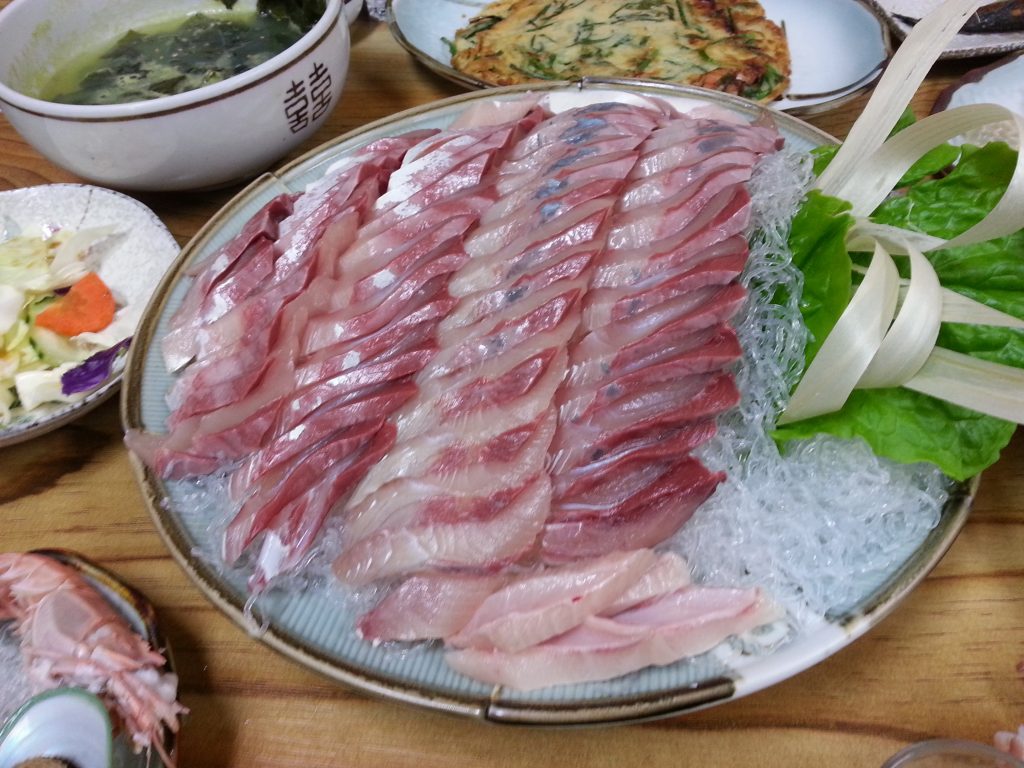 Yellowtail is sold as frozen fillets in the United States and in other parts of the world but is always sold fresh in Japan. It is labeled as to whether it is suitable for eating raw or whether it should be cooked, and also labeled “farmed” or “wild.”

The fresh fish labeled as being suitable for eating raw are not different fish from the others, but it is prepared and packaged under more stringent sanitation conditions.

A Hamachi roll is a yellowtail sushi roll made with the upper part of a young yellowtail amberjack fish. Fish used for Hamachi are usually farm raised but could be wild caught. The roll is created by using a prepared nori (seaweed) sheet for the outside. Next, cooked sushi rice (a specific short-grained sticky rice) is used as the base layer, and then chopped or a long strip of yellowtail fish is added.

A vegetable, such as a cucumber might also be used as part of the roll.

The loaded rectangle of seaweed is placed on a sheet of plastic that is, in turn, placed on a towel or a bamboo sushi mat. The plastic and towel are used to carefully roll up the leaf so that it is on the outside of the rice, and the rice wraps around the fish and any vegetables that were added. The long roll is then cut into sections that are placed in a serving container with the cut ends facing up so the ingredients can be seen. This preparation can easily be turned into a yellowtail scallion roll by adding chopped scallions to the filling. 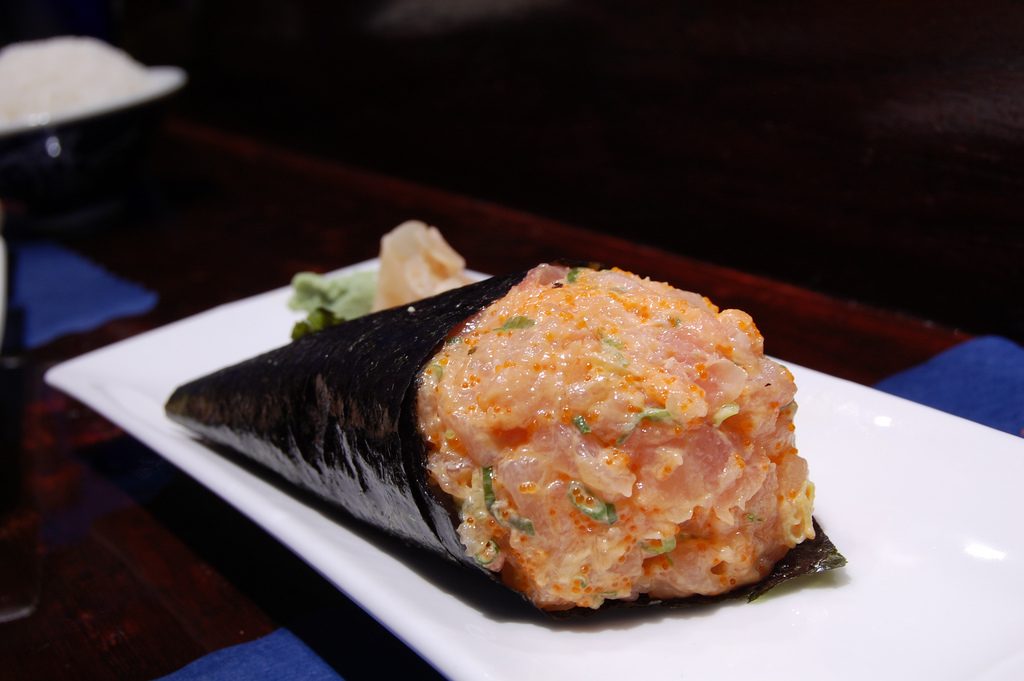 A negi hama is simply a yellowtail sushi roll with green onion added.  It is easy to create differently flavored sushi rolls just by varying the kind of vegetables or spices included. Negi Hamachi or spicy yellowtail maki is a spicy mix used in the negihama roll.

Amazingly, sushi isn’t hard to make. It isn’t even very hard to find ingredients for homemade sushi rolls. If you have family members who balk at the idea of eating raw fish, you can create substitutes for them, including tasty vegetable rolls. You might need to visit whole foods or ethnic food stores for some of the ingredients, but many are now carried in regular grocery or department stores.

Sushi Rice – sushi rice is a type of rice that is short-grained and a little bit sticky. This is good, because you need a rice that will stick together and hold its shape. If Sushi rice isn’t available, you can substitute arborio or a similar short grain rice. In a pinch, you can use basmati or jasmine rice.

Rice vinegar – to add to the cooked rice and to the finger water.

Nori – this is a tasty sort of sea weed that is sold in pressed sheets. Since it is the outside layer that holds the sushi roll together, it is more than a little bit essential. 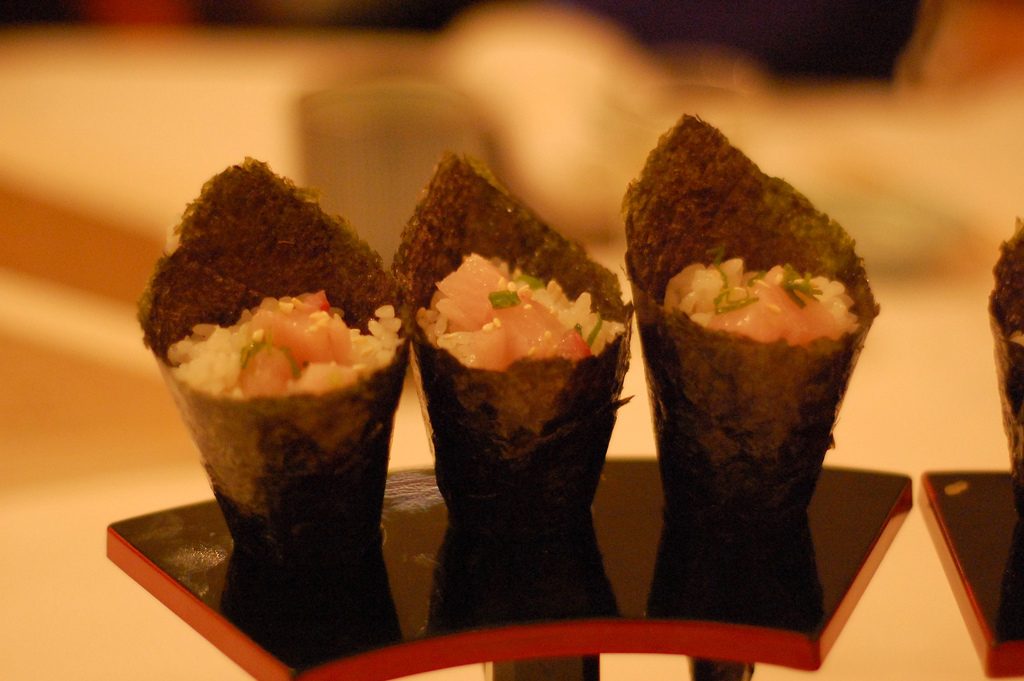 Yellowtail – for authentic Japanese Hamachi, you want the kind of yellowtail that is also called amberjack. It has a unique flavor, and a texture that is often described as “buttery.” You can order it fresh, especially if you live in one of the west coast USA cities, or other areas that have access to the Pacific. You can even get it delivered to other parts of mainland US, but it is rather pricey. The summer 2022 red tides have some yellowtail fish farmers worried about their fish, and prices might go up.

Other fish – while it won’t be yellowtail, other fish can be substituted. If you are planning to eat the fish raw, it is a good idea to be certain of your source and to be very careful of hygiene during preparation. Dense-fleshed, light fish with few or no bones would be preferred. Salmon, trout or abalone can be used.

Vegetables – just about anything that you can slice into a long stick such as carrots, celery, or cucumbers will work great. Other vegetables that are good to add chopped include chives, green onions, shallots, or ramps. Grated horseradish can add bite.

Wasabi – Japanese horseradish, a type of Brassicaceae that is spicy-hot. It can be prepared by grating the stem or by using the leaves, somewhat like garden cress. In fact, if you are a home gardener seeking a wasabi substitute, arugula or garden cress can provide similar flavoring, although perhaps not as strong. Wasabi loses its flavor quickly after being prepared, so chefs often put it in between the fish and the rice too because it holds its flavor better when covered.

Sauces – Sriracha and spicy mayonnaise, soy, teriyaki. Note: you can make your spicy mayo by adding 1 tablespoon sriracha to one cup mayonnaise.

Water with Vinegar – Not quite an ingredient, and not exactly equipment. A small bowl with water and vinegar is used to dip fingers during preparation.

These directions are for an inside/outside roll. This means that the seaweed is in between two filling layers, and another ingredient is wrapped around the outside.

Sushi is one of those recipes that sounds fancy and looks complicated but can be changed to suit the occasion or the ingredients you have on hand. The two items that are almost essential are the rice and the nori. Since seaweed might not be available everywhere, you could experiment with trading it out for cabbage or lettuce leaves.

But the results can be a bit unpredictable.

The nori can be part of an inside/outside roll, or it can be the outer layer that holds the roll together. While yellowtail amberjack is a marvelously tasty fish, if you can’t get it where you are located, then use a locally available fatty fish.

Experiment with the sauces and spices until you have a combination of sauce, spice and other ingredients that you love and that will have guests begging for more. 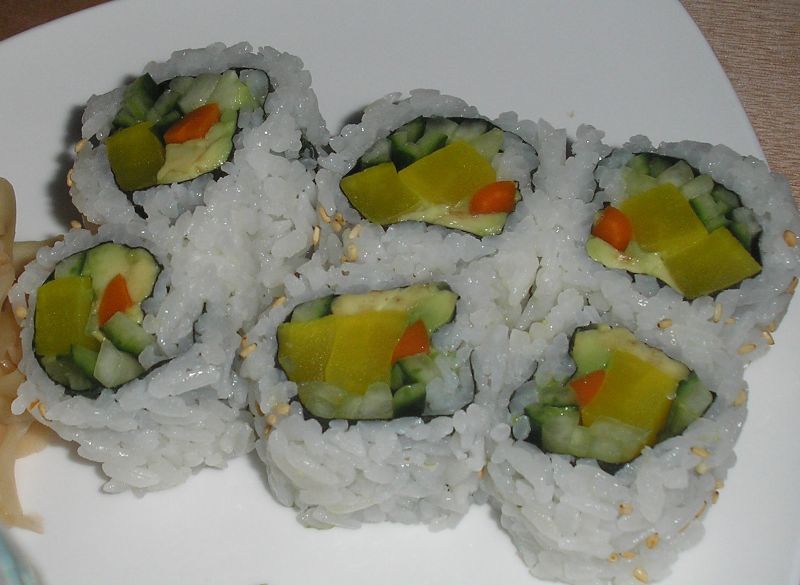 When preparing sushi for a crowd, always be sure to have a tray of it that is just vegetables. This will take care of the people who either dislike fish or are nervous about eating it raw. By varying the ingredients in the vegetable rolls, you can also meet requirements for people who have allergies. Just be sure to label the trays so folks can tell what is available.

You can put almost anything in a vegetable sushi roll – cucumbers, carrots, avocados. You could even go so far as to make a sweet sushi roll using such items as dates and nuts. Your imagination is the only limit to this process. It might not be authentic, but it is almost certain to be tasty.

If you are serving sushi to guests, you want them to go away remembering your event as the place where the best food ever was served, not as a gastronomic disaster. When making sushi, especially if one of the ingredients is raw fish, be super careful of your kitchen hygiene. Use separate cutting boards for meat and vegetables, and keep sauces and mayonnaise refrigerated until it is time to use them. And, of course, refrigerate the yellowtail rolls until it is time to serve them.

With that said, sushi can be an amazing appetizer or even a filling main course, depending on the ingredients and how many you make. With a bit of care and some practice, you can create a feast that will impress even if you are operating on a restricted budget.

ushi is one of those things that when you put it on your party menu, it almost always moves your event from ordinary to extra special. Even if you take the course of simply serving vegetable sushi rolls, the preparation time and the beautiful appearance of them is sure to impress. 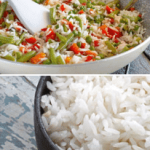 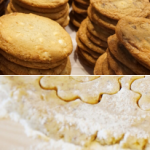