When cooking pasta, even if you follow the instructions on the package perfectly, the noodles can be ruined by small mistakes made during the cooking process. Making these mistakes might result in a lump of pasta that is stuck together and difficult to eat. However, there are some simple steps you can follow to keep pasta from sticking together.

Why Does Pasta Stick Together? 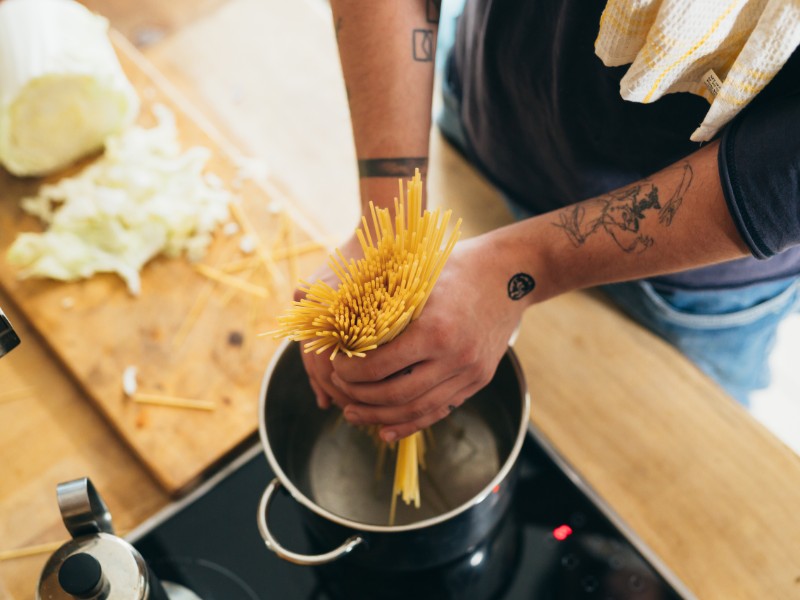 Most types of pasta are primarily made of starch. The combination of heat and water during boiling causes the pasta to release starches that make the noodles sticky. These starches make noodles stick together in a big lump that’s hard to separate.

How To Keep Pasta From Sticking Together (Eight Different Methods)

Make Sure the Water Is Properly Boiling

The key method to making sure pasta doesn’t stick together after cooking is to make sure the water is fully boiling before adding noodles. While most recipes for pasta provide detailed instructions, few mention that the water should come to a full boil before adding the pasta.

Fully boiling water ensures that the noodles move around, so they’re less likely to stick early in the cooking process. If spaghetti is cooked in warm water, the pasta will become rubber-like and stick together immediately after cooking.

Use Enough Water for Cooking Pasta

Pasta can stick together after cooking if not enough water is used in the process. Use about 4 quarts of water for 1 pound of spaghetti. If too little water is used, the starch released by the pasta noodles will concentrate too much and increase stickiness.

Stir the Pasta While Cooking

Stirring the noodles as they cook is crucial to prevent sticking after the pasta is done. Once the water comes to a full boil and the noodles are immersed, make sure to stir at least every 30 seconds in the first three to five minutes of boiling to help prevent the noodles from sticking to the bottom of the pan.

After the first few minutes, stir pasta noodles every one or two minutes to prevent sticking. Stirring pasta helps to quickly dissolve the starch released by noodles.

Add Salt to the Water

Adding enough salt to water not only improves the flavor of dishes but also prevents the gelatinization of the starch released by the noodles. Add 1 tablespoon of salt for 1 pound of pasta. Add the salt to the pot only after the water is fully boiling.

It’s important to cook pasta for exactly how long the instructions on the package state — or one to two minutes less to leave the noodles slightly undercooked (al dente). Overcooked noodles will not only stick together in a lump, but will also have a sticky and unpleasant texture that’s difficult to eat.

Do not Keep Pasta in a Colander too Long 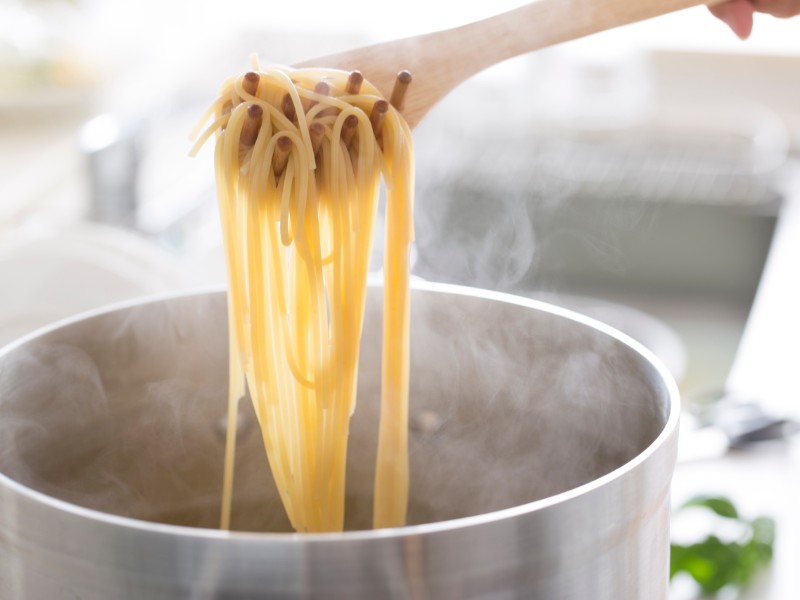 If the pasta stays in a colander for too long, the noodles will inevitably stick together because the starches will begin to become firm. While adding a little bit of olive oil after cooking might prevent sticking, the oil will also prevent the sauce from sticking to spaghetti.

Don’t keep pasta in a colander for more than one minute. Cook pasta sauce in advance to make sure the cooked pasta doesn’t need to sit for long periods.

Finish Cooking Pasta in the Sauce

Rinsing cooked spaghetti with cold water is an effective way to prevent sticking when the pasta won’t be added to a sauce immediately, or is meant to be eaten cold. The cold water will remove the starch and, therefore, stop the pasta noodles from sticking. 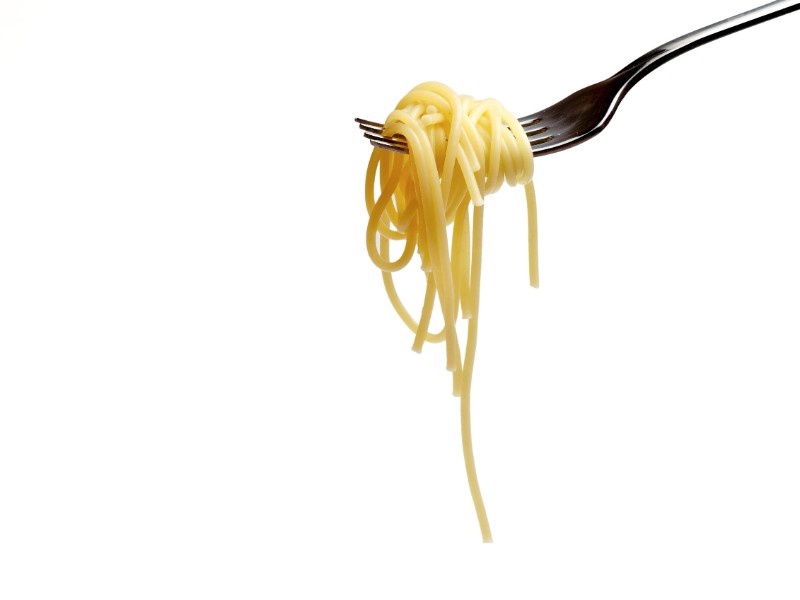 Some of the methods considered to be popular and effective in preventing pasta from sticking have been proven to be ineffective.

One of the most popular tips to stop the pasta from sticking together is adding olive oil to the pot of boiling water, but this method actually doesn’t work well. First, the oil does not dissolve in the water and stays on top, failing to help keep the pasta noodles from sticking. Second, the oil will only coat the noodles once they’re drained and will stop sauce from sticking to the spaghetti.

Some websites advise breaking long pasta, like linguine or spaghetti, in half to help the noodles fit in the pot and be covered by water equally. This method doesn’t stop the noodles from sticking and only makes the dish less convenient to eat. Long noodles are meant to be eaten by twirling them around a fork.

Instead of breaking the pasta, place the noodles into fully boiling water and push them inside gently as the bottom part begins to soften.

There are a few proven techniques to cook the perfect pasta and prevent the noodles from sticking. The key steps in making pasta are to use enough water and make sure the water is fully boiling before adding the noodles.

Other useful techniques include stirring the pasta regularly while cooking and minimizing the amount of time that pasta sits in a colander. Adding olive oil, cooking pasta in a large pot, or breaking long pasta in half before cooking are ineffective methods and won’t stop pasta noodles from sticking. 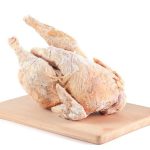 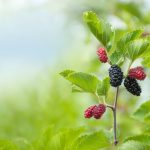 Mulberry vs Blackberry: What’s the Difference?