Jalapeños are medium-sized, pod-type chili peppers with smooth, firm skin. Originating in South America, jalapeños are popular in Mexican and Spanish cuisine for their moderate heat and spicy flavor.

Other types of peppers and certain spices provide similar heat and flavor to foods and make good substitutes for jalapeños. 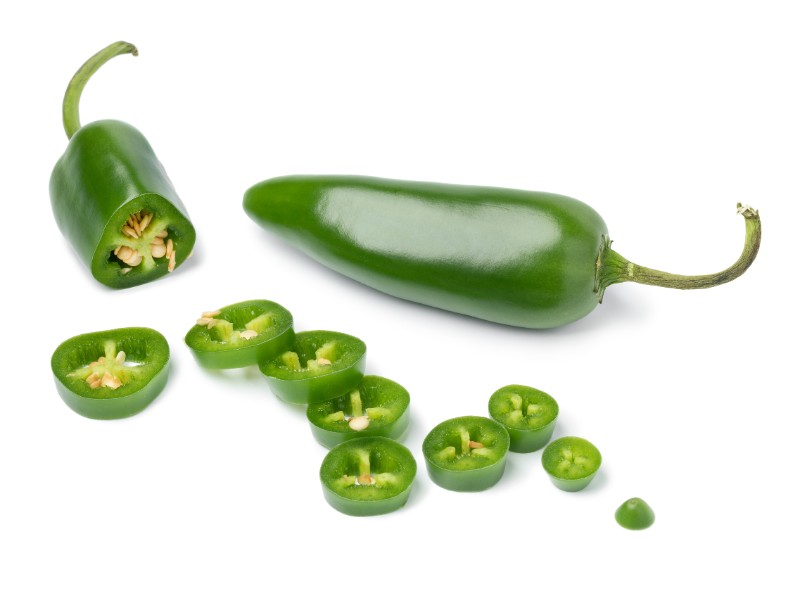 The best substitute for jalapeños is poblano peppers. These heart-shaped peppers, originating in Mexico, are usually harvested and used while they’re still green and at the height of their flavor.

Poblanos and jalapeños have a similar heat level, making poblanos a good substitute, although poblanos aren’t as sweet.

Use poblanos instead of jalapeños in stuffed pepper recipes, and use these peppers as a 1:1 substitute in salsas, sauces, and chopped up in salads.

Other Jalapeño Substitutes, Alternatives, and Replacements

Other foods also make good substitutes for jalapeños. Here is a list of foods that can replace jalapeños.

Anaheim peppers make a good substitute for jalapeños because the two peppers have a similar flavor and texture.

Anaheims are spicier than jalapeños and their heat increases with cooking, so use fewer anaheims when substituting for jalapenos.

Perfect as stuffed peppers, anaheims can also be chopped or sliced and added to salsas, rice dishes, and other Mexican or Spanish foods.

Cubanelle peppers aren’t as spicy as jalapeños but work as a replacement when combined with a little extra spice or chili powder to add heat.

Cubanelles are great as a jalapeño replacement in stuffed pepper recipes but are smaller than jalapeños, so you should use more cubanelle peppers when substituting

Use cubanelles as a 1:1 replacement, chopped, for jalapeños in sauces and salsas.

Ancho chili peppers, which are dried poblanos, aren’t as hot as jalapeños but work as a substitute in sauces, salsas, and other cooked foods.

Anchos have a milder heat and smokier flavor than jalapeños, so add some extra spice or chili powder for extra heat.

Anchos can’t replace jalapeños in stuffed pepper recipes because anchos are dried and can’t be stuffed.

Habanero peppers are small and extra hot, with a strong kick. Use habaneros when they’re still green because their heat diminishes as they ripen and change color to red, orange, or yellow.

With a sweet undertone that balances the heat, habaneros are a good substitute for jalapeños in salads, salsas, and sauces, but habaneros are too small to use as substitutes in stuffed pepper recipes.

Because of habaneros’ intense heat, use them as a 1:2 replacement for jalapeños.

Fresno peppers are smaller than jalapeños but can be used as a substitute because of their similar flavor and heat. However, Fresnos have a sweet, smokey undertone.

Use Fresnos as a 1:1 replacement in salsas, sauces, rice dishes, and other Mexican foods.

Because Fresnos are smaller than jalapeños, use more Fresno peppers in stuffed pepper recipes.

Bell peppers make a good jalapeño substitute because of their similar appearance and flavor to jalapeños, but bell peppers are milder and sweeter than jalapeños.

Because of their large size, bell peppers are an excellent replacement when making stuffed peppers. Use one bell pepper in place of one jalapeño.

Cayenne peppers have a similar flavor to jalapeños, making cayennes an excellent substitute for jalapeños.

Usually dried, cayenne peppers add punch to sauces, salsas, and rice dishes. Use as a 1:1 replacement.

Hotter and spicier than jalapeños, guajillo peppers make a good substitute for jalapeños but use less to prevent the heat from being too intense.

Because guajillos are so hot, they are popular in many Mexican dishes. Use fresh or dried guajillos in salsas, sauces, and rice dishes, but halve the quantity when substituting for jalapeños.

New Mexico chilies, frequently used in Mexican cooking, are not scientifically classified as peppers but are considered to be peppers in Mexican cuisine.

New Mexican chilies are smaller than jalapeños and should be used at a 2:1 ratio when substituting.

Originating in Mexico, serrano peppers are popular in Mexican cuisine because their strong heat and spice add a powerful kick to dishes like salsas and sauces.

Because serranos are much hotter than jalapeños, use fewer serranos when substituting to prevent overpowering heat.

Serranos are a great substitute when used raw in salads, but don’t work as stuffed peppers because of their small size.

One of the hottest small peppers, Thai chili peppers are available in many varieties, all with extra-strong heat.

Much hotter than jalapeños, Thai chili peppers should be used as a 1:2 replacement in sauces, salsas, and rice dishes.

Raw Thai chili peppers are delicious when sliced thinly and added sparingly to salads, but these peppers are too small for stuffing.

If you don’t like intense heat, banana peppers make an excellent substitute for jalapeños because banana peppers are sweet and mildly spicy, with a low heat level.

Use two banana peppers in place of one jalapeño in salsas, sauces, and rice dishes. For extra heat, add chili powder or extra spice to the food.

Banana peppers are commonly pickled and served as a side dish. Don’t add pickled banana peppers to cooked Mexican foods because the flavors don’t blend well. 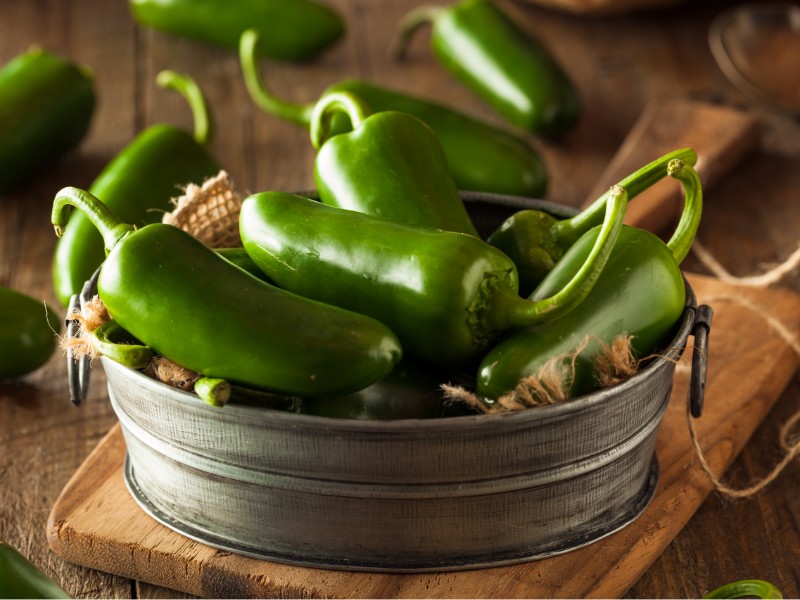 Jalapeños add heat and a spicy flavor to foods and give the dish a chunky texture. Certain spices or spice combinations can achieve the same flavor in place of jalapeños, but the texture will be smoother.

Dried chilies are ground into a fine powder to make chili flakes. Use chili flakes instead of jalapeños in sauces, salsas, and stews to add heat and flavor to the dish.

¼ of a teaspoon of chili powder provides a similar heat and flavor to one jalapeño.

Use ½ a teaspoon of red pepper flakes in place of one jalapño, or a little more if you prefer extreme heat.

Sweet paprika and hot paprika are spices made from different varieties of red peppers, and provide varying levels of heat, with a smokey flavor.

Mix sweet paprika and hot paprika and use this blend as a substitute for jalapeños to add heat and flavor to sauces, stews, salsas, and rice dishes.

Use 1 teaspoon of paprika mix in place of one jalapeño. Balance the ratio of sweet to hot paprika according to taste.

Cayenne peppers are dried and ground to a fine powder to make ground cayenne pepper spice. Use this spice in place of jalapeños to add flavor and heat to Mexican foods like salsa, sauces, and rice dishes.

Use ½ a teaspoon of ground cayenne pepper instead of one jalapeño, or adjust the quantity according to taste.

Use freshly ground black pepper in place of jalapeños to add heat to sauces, stews, salsas, and other spicy dishes.

For a strong, peppery kick, use ¼ of a teaspoon of freshly ground black pepper instead of one jalapeño.

Use four to six black peppercorns instead of one jalapeño in sauces, salsas, and rice dishes. 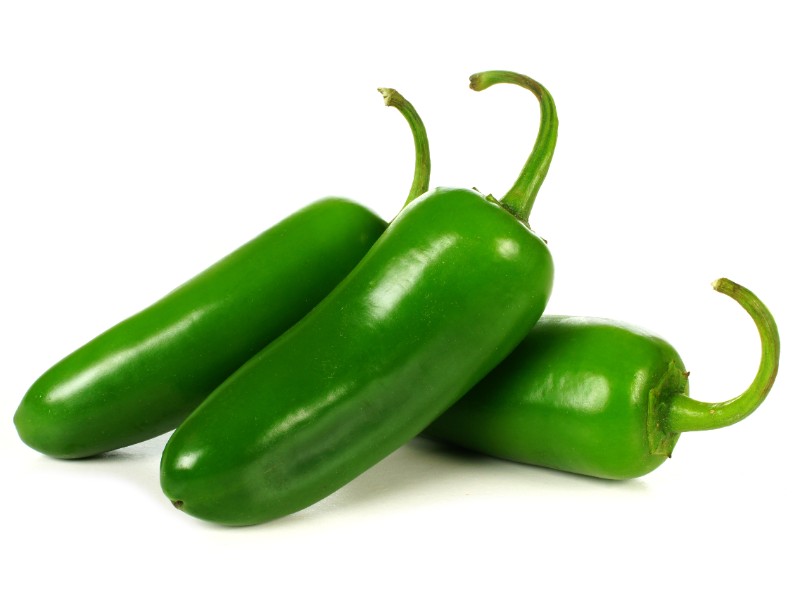 Certain sauces add heat and flavor to foods and can be used in place of jalapeños to add a kick to Mexican dishes.

There are many varieties of hot sauce available, most of them made from cooked chili peppers. Whilea hot sauce doesn’t provide the same texture, adding hot sauce to salsas, sauces, and stews gives a similar heat and flavor to jalapeños.

Use 1 teaspoon of hot sauce in place of one jalapeño, adjusting quantities according to taste.

Tabasco is a particular brand of sauce made from tabasco peppers, vinegar, and salt. Tabasco sauce has its own unique flavor but adds heat to dishes in a similar way that jalapeños do.

Use ½ teaspoon of tabasco sauce in place of one jalapeño, but add more tabasco if you like intense heat.

Made from chili peppers, vinegar, garlic, and salt, sriracha is a hot sauce popular in Middle Eastern dishes. Sriracha works as a substitute for jalapeños to add heat to Mexican foods. The flavor isn’t the same, but the heat of sriracha adds a good kick to salsas and sauces.

Use 1 teaspoon of sriracha in place of one jalapeño, adapting quantities according to taste. 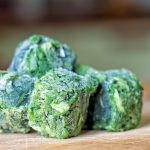 How to Thaw Frozen Spinach 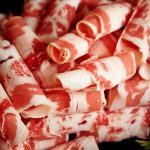 How To Defrost Bacon