Lard is a semi-solid cooking fat made from rendered pork fat — pork fat that has been melted and separated to remove the impurities. White in color and almost flavorless, lard is commonly used in cooking and baking and gives pastries and other baked goods a light, fluffy texture.

Lard is also used for sauteéing, frying foods, and is even used for deep frying.

Other types of cooking fat, such as butter, margarine, and various types of cooking oil, all make good substitutes for lard because they provide moisture and act as a binding agent for other ingredients. 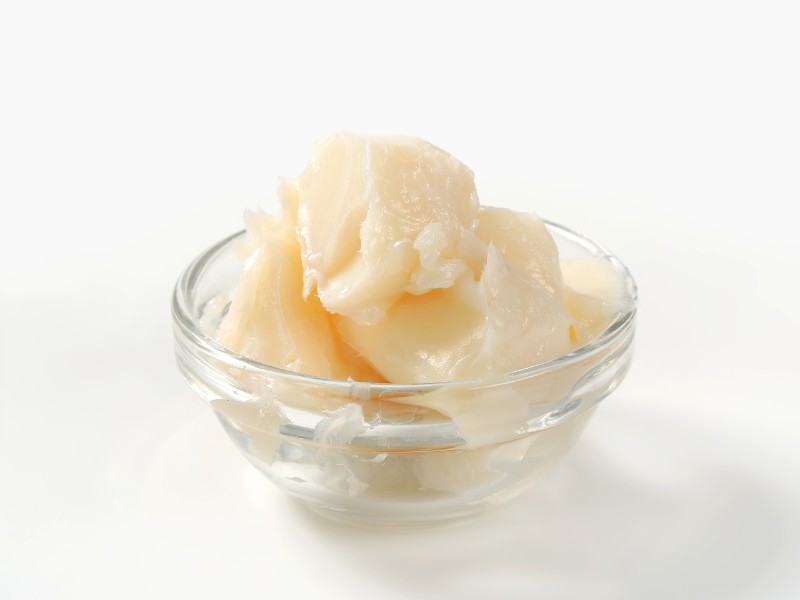 Butter has a creamy texture with a subtle sweetness that lard lacks. When using butter as a substitute, use slightly less sugar or sweetening agent to compensate for the extra sweetness of the butter.

Lard has a 100% fat content, which gives pastries their flakiness and makes other baked goods light and fluffy. Butter contains 80% fat content, so use slightly more butter than lard to provide the full amount of fat needed in the recipe.

Replace 1 cup of lard with 1 ¼ cups of butter in most recipes for pie crusts, pastries, doughs, and other baked goods.

Butter is also a good substitute for lard when sauteéing and frying foods, however, butter isn’t suitable for deep-frying because it browns and burns at a lower temperature than lard, and can’t handle the heat of deep-frying.

Other Lard Substitutes, Alternatives, and Replacements 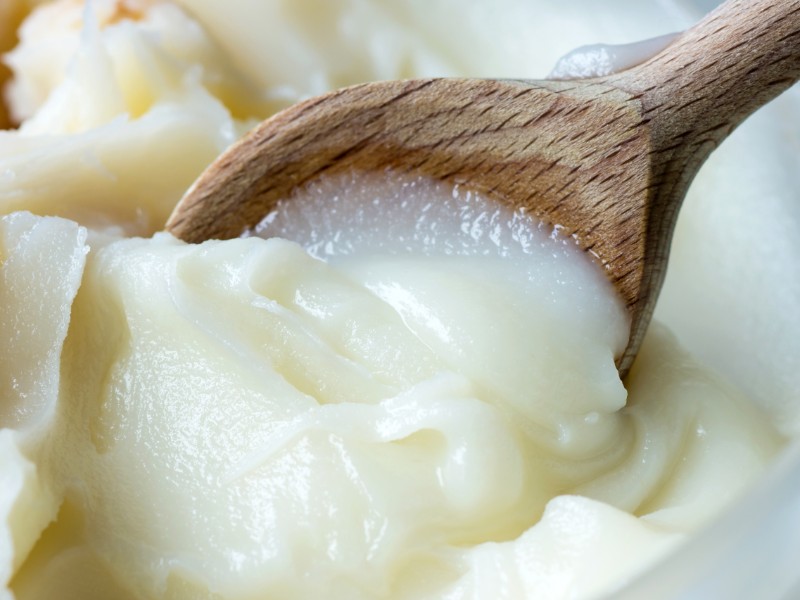 Here is a list of other foods you can use in place of lard.

Margarine is a processed fat used in cooking and baking and is usually considered a healthier alternative to butter and other animal-based fats. Margarine is commonly made from vegetable oil and works as a good substitute for lard in most recipes because it has a similar consistency to that of lard.

Margarine contains water, but lard doesn’t, and lard has a higher fat content than margarine. When using margarine to replace lard in baking recipes, use 1 ¼ cups of margarine for every 1 cup of lard to compensate for margarine’s lower fat content.

Margarine works as a substitute for lard to fry foods, but not for deep-frying because margarine can’t handle the intense heat needed.

Because it has a high smoke point, vegetable shortening works well for sauteéing and for deep frying.

Coconut oil is a cooking fat derived from the meat of the coconut. Semi-solid at room temperature, coconut oil makes a healthy substitute for lard in baked goods and fried foods, including deep frying.

Use virgin coconut oil as a lard substitute to prevent the coconut flavor from taking hold. Like lard, coconut oil is 100% fat, so use it as a replacement in an equal ratio.

Beef tallow is a cooking fat made from rendered cow fat. Solid at room temperature and liquid when heated, beef tallow is an excellent 1:1 lard substitute in cooking and deep-frying.

Because of its subtle meaty flavor, beef tallow isn’t suitable for baking.

Ghee is a cooking fat that is made from melted butter, which is strained to filter out the milk solids. The remaining liquid solidifies into ghee.

Ghee has a smooth texture and rich flavor. You can use melted ghee as a 1:1 substitute for lard in baking and cooking, including deep-frying. 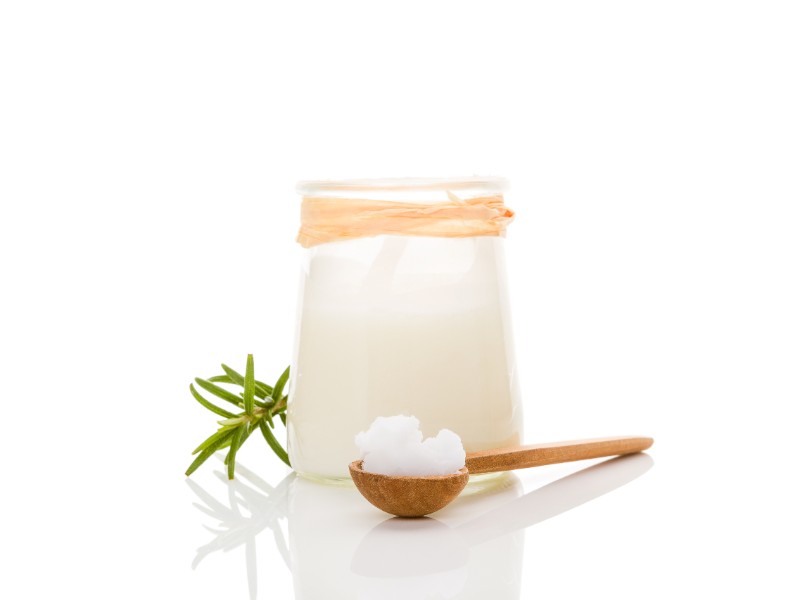 Sunflower oil is made from pressed sunflower seeds. High in polyunsaturated fats, sunflower oil has little flavor and won’t affect the taste of foods when used as a substitute for lard — however, baked goods will have a heavier texture.

Use ⅞ of a cup of sunflower oil to replace 1 cup of lard in baked goods, but use on a 1:1 basis for frying and sauteéing. Sunflower oil is also good for deep-frying because of its high smoke point.

Olive oil, made from pressed olives, is a good substitute for lard in fried or sauteéd foods, but avoid using olive oil in baked goods because of the rich olive flavor.

Avocado oil has a high smoke point and is good for pan-frying and deep-frying. Replace 1 cup of lard with 1 cup of avocado oil.

Canola oil is made from a particular variety of rapeseed and is considered a healthy choice because it is high in monounsaturated fats. Use canola oil as a 1:1 substitute for lard in cooked dishes, including deep-fried foods.

Baked goods will have a heavier texture when replacing lard with canola oil, so use slightly less. Use ⅞ cup of canola oil place of 1 cup of lard.

Peanut oil is extracted from either raw or roasted peanuts and the oil from raw peanuts has almost no flavor. This oil works as a 1:1 substitute for lard in cooking and baking.

The oil from roasted peanuts has a subtle nutty flavor, which doesn’t work well in most baked goods but is good for deep-frying, pan-frying, and sauteéing most foods.

Yogurt is made from milk that has been processed with bacteria known as yogurt culture. The resulting substance is a thick, creamy dairy product with a sour tang. Natural yogurt has a smooth texture and semi-liquid consistency.

Many yogurts have additional flavorings or natural fruit added to make the yogurt more appealing and interesting. Only use plain, unflavored, natural yogurt as a 1:1 substitute for lard in baked goods like cakes, bread, muffins, and cookies, but add extra sugar to the recipe to balance out the sour taste of the yogurt.

Avoid using yogurt in pastries and pie crusts. Yogurt isn’t suitable as a replacement for cooking and frying.

Fresh cream is the fat that is skimmed off the surface of cows’ milk before the milk is homogenized. Fresh cream has a high-fat content, making it a good substitute for lard in cakes, bread, and other baked goods.

Fresh cream used as a 1:1 substitute for lard gives cakes, muffins, cookies, and bread the same light, fluffy texture as lard gives, and adds a rich flavor. However, it can’t be used for frying.

Sour cream is made by fermenting fresh cream with a bacterial culture that gives the cream a thick consistency and a sour taste.

Sour cream works as a 1:1 substitute for lard in baked goods like cakes, bread, muffins, and cookies because of its high-fat content, and added moisture that binds ingredients together. The smooth texture of sour cream gives baked goods a light and fluffy consistency.

Sour cream affects the taste of the finished product, so add extra sugar to the recipe to compensate for the sourness of the cream. Sour cream isn’t suitable for frying.

Applesauce is made from cooked apples, and works as a lard substitute in cakes, bread, muffins, and cookies because it acts as a binding agent and adds moisture. Avoid using applesauce as a replacement in cooking and frying, because it doesn’t contain oil.

There are many types of bottled or canned applesauce available in stores. Choose an unsweetened variety of applesauce because the apples themselves contain natural sugar and give foods a sweet flavor.

Mashed bananas work as a lard substitute in baked goods like cakes, muffins, and breads because bananas add moisture and act as a binding agent. However, mashed bananas aren’t suitable for pie crusts and pastries, and can’t replace lard in cooking and frying.

Use ½ cup of mashed bananas in place of 1 cup of lard in baked goods, but use slightly less sugar to compensate for the bananas’ sweetness.

Avocados have a creamy texture and contain natural oils, making them a good substitute for lard in baked goods like bread, cakes, cookies, and muffins. However, avoid using mashed avocados in pie crusts and pastries, because the texture will be affected.

Mashed avocados add moisture and bind the other ingredients together. Use ½ cup of mashed avocado in place of 1 cup of lard in baked goods, but don’t substitute lard with avocado in cooking and frying. 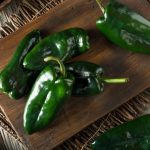 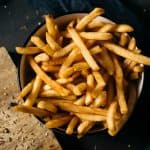