Last Updated Feb 2020 – If you’re looking for a good dehydrator to perform basic drying functions, a NutriChef Food Dehydrator could be the answer for you. The four models we have researched for this review are pretty straightforward in their design and function making them a great machine for beginners and occasional users.

When I started looking to buy a food dehydrator, I had no idea what I should look for. With so many models on the market, I felt like a two-headed kitten in a tuna fish factory. Some dehydrators were round, some were square.  Some had fans on top, some on the bottom, and some on the back.

Then there were the features.

I found every bell and whistle known to man on some machines including full digital displays with memory storage and smart technology. On the other end, I found a lot of machines that simply plugged in and went to work without the push of a button or turn of a dial.

I wasn’t looking for the best (and certainly not the worst) machine on the market, I just wanted something that could perform simple food dehydration without a hassle. 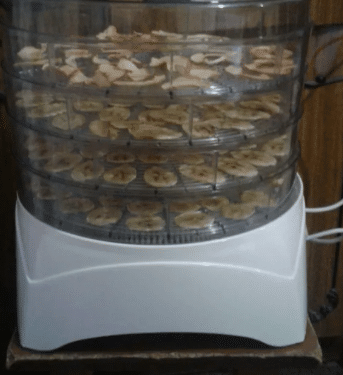 Initially, I wanted a dehydrator because I was looking to improve my diet. I was aware of the benefits of dehydrated foods. Not only are they nutritious, but they enhance the flavor of your food. However, the main reason I wanted to purchase a food dehydrator was that I like to know exactly what’s in my food.

It’s a pretty simple idea, when you think about it. I don’t like reading words on the ingredient list that belong in a sci-fi novel. With a food dehydrator, I know that my banana chips are just bananas, no yellow 45 or high fructose corn syrup.

However, after I purchased my dehydrator, I began to realize that there are so many more benefits to drying your food at home.

After a month or so of making fruit and vegetable chips, jerky, and fruit roll-ups, I asked myself “What else can I put in this thing?”

I started with my garden. I harvested my peas and lentils and ran them through the dehydrator. Next I foraged some wild mushrooms and dried them, too. Then it was on to drying meats for jerky and adding to stews.  Before I knew it, I had an arsenal of soup enhancers in my pantry that would keep for months.

This revelation led me down a path of dried peppers for salsa, nuts and cacao for trail mix, and crackers (lots and lots of crackers). It was while I was making graham crackers for my kids that I realized another great benefit to the food dehydrator… they’re kid friendly!

Now, I had my young children playing sous chef after school.

I started to dehydrate foods that I would normally can. While canning is a very effective way to preserve food, it can be dangerous. Pressure cookers, handling glass jars with tongs, and boiling water are not ideal conditions for children. However, my four years old was perfectly safe laying kale across a tray and sliding it into the food dehydrator.

I was a happy chef. The food dehydrator not only handled my basic needs for healthy snacks, but it also piqued my kids’ interest in cooking. Once you get your children involved in cooking, they tend to let their guard down and explore new foods. Hello homemade trail mix, goodbye over-processed snack packs! There are also Nutrichef dehydrator recipes to help you along the way.

Of course, I was never going to pump out copious amounts of potato chips for a massive super bowl party, but I didn’t need that. I needed a practical machine that I could rely on to dry food a few times a week. If that sounds like something that would fit your needs, these food dehydrators from NutriChef could be the best fit for you.

This basic model is incredibly easy to use as it has only one button. Perfect for singles, couples, and small families the five tray design can make a good amount of food, but won’t feed an army. It is also severely limited by the lack of a thermostat.

Many recipes and ingredients call for different temperature. In fact, some recipes require the temperature to be adjusted during the dehydration process.

Pros: This model is incredibly easy to use with a simple one-button (on/off) system. Just lay the food out on the trays, stack the trays, place the lid on top, and turn it on. Reviewers also commented on how easy it was to clean.  Especially since the trays are dishwasher safe. 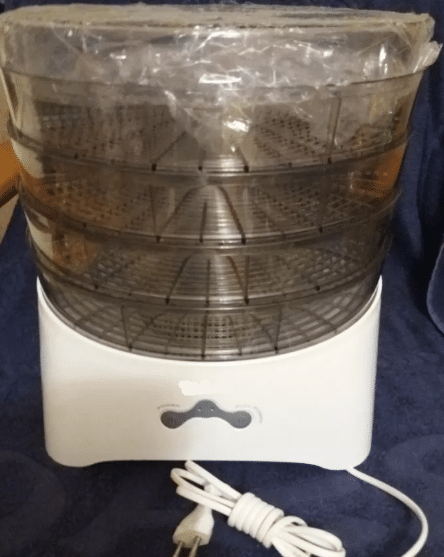 Finally, many jerky enthusiasts were happy to find the 180-degree max temperature because meat requires higher temperatures than fruits and vegetables.

Cons: There were quite a few complaints about the fragility of the drying trays with many reporting cracks and breaks after one use or cleaning. While the basic controls of the machine make for easy operation, they also severely limit you because you can’t control the temperature.

Also, the lack of a timer means you either have to buy a plug-in timer or keep your eye on the machine while operating.

The NutriChef Electric Food Dehydrator Machine is the most basic design on this list. There are no special features and no controls which means you’ll be using that see-through lid to check back periodically on your ingredients. But if you’re looking for light use and easy storage, this machine would make a good addition to your kitchen.

This dehydrator model picks up where the previous one left off. A 250 Watt bottom-mounted fan helps to ensure an even drying process while the addition of a thermostat dial gives you some control. The ability to change temperatures is truly imperative if you’re looking to try out new recipes.

Pros: Many reviews praised this model for its ease of use. There are only two dials on the front of the machine:  One for on/off and one for temperature control. Users also commented on how easy it is to clean this model as the trays are removable and made from stainless steel. There were more than a few positive reviews on the compact size of the machine as well as the stylish aesthetic. 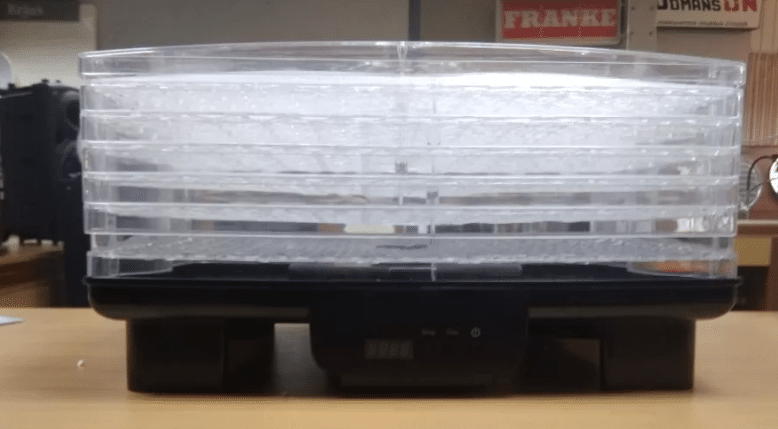 Cons: The biggest complaint about this particular machine was the fact that the temperature dial is in Celsius. If you are accustomed to Fahrenheit, you will have to look up the conversions. The other major knock against this machine is the lack of a timer. While this can be solved by purchasing a plug-in timer, many believe one could have easily been added as a feature.

Finally, there were some complaints about the overall performance of this model. Some stated that drying times took longer than expected while others stated that the thermostat was not accurate.

This model is a decent choice for beginners and chefs of the future. The temperature dial is easy to use and gives you the ability to set the temp to your liking, but the accuracy is questionable.

The bottom-mounted 250 Watt fan and 5 stainless steel trays are exactly the same as the Multi-Tier Professional model. The big improvement here is in the name…digital! The LCD display on this dehydrating machine gives you more accurate temperature settings and brings the crucial feature of a timer.

If nothing else, the timer lets you dehydrate food while you sleep or while you’re at work making your life even easier. 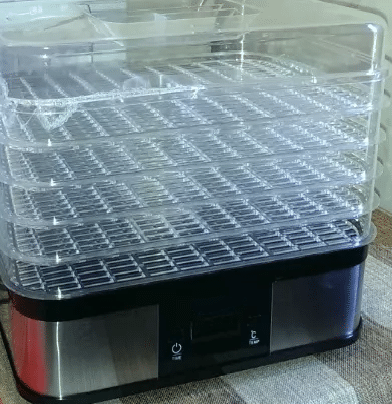 Pros: Customers praised its sleek design and elegant style. Many reviewers appreciated the size of the machine as it provides plenty of drying space without taking up too much counter space. Overall, customers were generally satisfied with this machine with the opinion that it worked well enough for its affordability.

Cons: Like the previous model, this machine registers its temperature control in Celsius, so you’ll have to do the math to convert it to Fahrenheit.

There were quite a few complaints about the fragility of the stainless steel trays and the fact that they are not dishwasher safe. Finally, a handful of reviewers stated that the machine does not evenly dehydrate the food as they found one side of the trays drier than the other.

This is literally the same model as the NutriChef Multi-Tier model except for the fact that it has a digital timer and thermostat. However, that is a big-time addition. Of course, the fact that it registers temperatures in Celsius will be a big turn off for many. On the bright side, it’s a great opportunity to brush up on your math skills!

This muntifunctional dehydrator model is truly unique from the 3 listed above. Mainly because it is not just a food dehydrator, but also a steamer and rice cooker. To be perfectly clear, there are really two functions here: dehydrator and steamer.  While you can absolutely cook rice in this machine, it is done under the steamer setting. 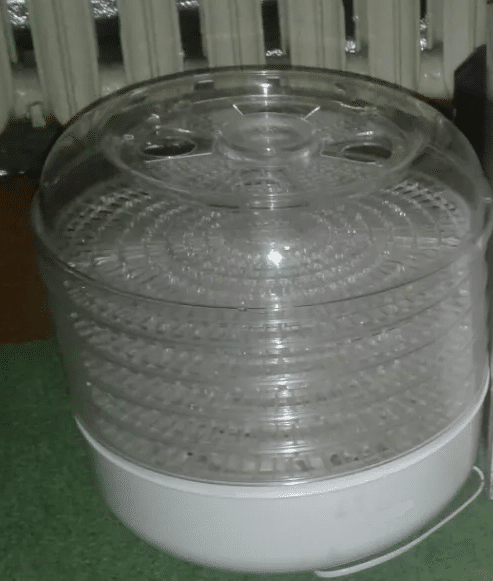 Pros: The obvious convenience of having a multi-functional Nutrichef electric countertop food dehydrator was stated over and over. Most reviewers said that the dehydrator worked well enough, but the steamer and rice cooker functions received mixed reviews.

Cons: The main complaint about this model was the lack of a thermostat. The temperature is locked in at 183 degrees Fahrenheit in dehydrator mode and 212 degrees Fahrenheit in steamer and rice cooker mode. Many reviews thought the steamer was of poor quality. There were a few reports of a loud rattling noise while in operation.

One important negative review pointed to the fact that there is no indicator for when the water runs low. When the steamer runs out of water, it can damage the machine.

While this machine seems ideal for people who enjoy eating healthy, the quality is questionable. The versatility of steaming and drying food is appealing, and, if you like to cook rice, this machine could warrant a permanent space on your kitchen counter.

While NutriChef food dehydrators may not be the cream of the crop, they will get the job done. It should be noted that these machines will save you money in the long run. Compare the price of two bananas to a small bag of banana chips and you’ll see the difference.

If you opt for a model with a timer (or simply buy a plug-in timer), you will find that these machines are an excellent time saver, too!

These dehydrators are viable options for anyone who is curious about drying and preserving their own food. They can function as meat dehydrators and turn a hunter’s game into jerky, vegetable dehydrators for changing a gardener’s harvest into a pantry of yummy treats, or both for converting a long road trip into a mobile picnic.

However, if you’re looking to grow as a chef and explore new methods and ingredients, you may want to consider some different brands.