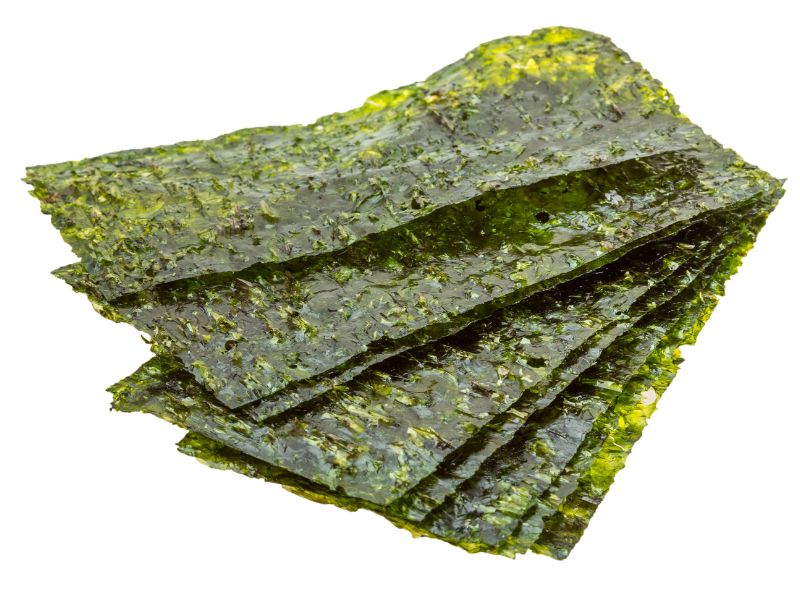 Seaweed is very popular in some cultures, particularly those that evolved near coasts or around large rivers. Individuals around the globe that have never tasted seaweed may wonder what it tastes like.

We’ve put together this guide to help explain what you can expect from a bite of seaweed if you’ve never gotten to try it. Below is some more information about it and what it tastes like! 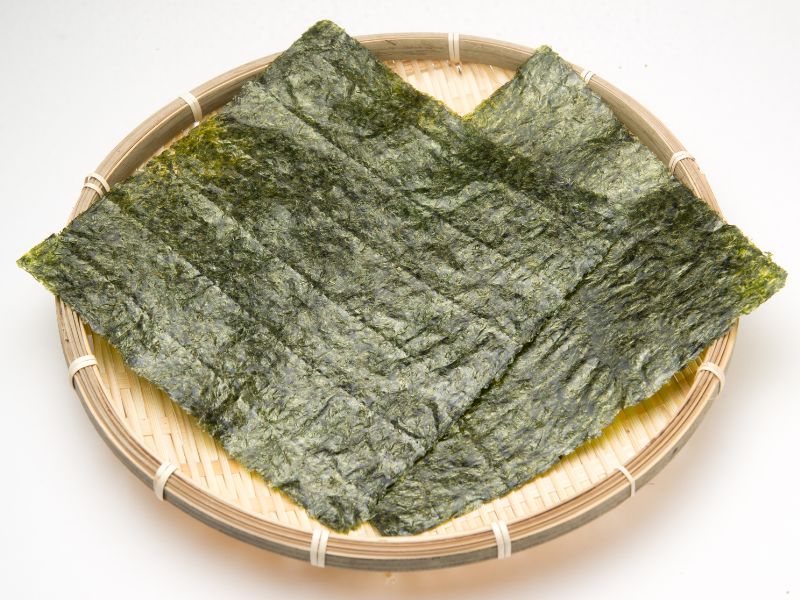 Seaweed has a very mineral-like taste with a bit of saltiness. It’s high in iodine, which is commonly found in sea salt. This gives it a salty flavor that interacts well with its mineral-like and earthy flavor.

The texture of this tasty treat can be difficult to describe as it changes based on its preparation. For example, seaweed will have a different texture and taste in sushi than in a salad or soup.

Ultimately, seaweed has a very soft and moist texture, but it’s very crunchy if dried. You can expect it to be fibrous and dense as well. It’s smooth to the touch, giving it an almost silky texture.

The Basics: What is Seaweed?

Seaweed is an aquatic species that is found in the oceans, streams, and rivers.

Technically speaking, it is more accurately classified as a species of microalgae rather than a plant, as it doesn’t follow the same growth patterns of a typical aquatic plant.

Because it gets energy purely from photosynthesis and has no basis in animal products, it’s a vegan product and would be safe for anyone who is sensitive to animal products or following a plant-based diet.

This aquatic product can be prepared and served in many different methods throughout the world. These different forms of the product can change the texture that it has, thus changing how it tastes to each person who tries it.

The main types available include Nori and Dulse.

Nori is typically served as flat sheets, which can be added as a garnish to ramen soups or as a casing to roll sushi in. On the other hand, Dulse has a different texture and can be served as the main ingredient in some soups, salads, and even sauces. 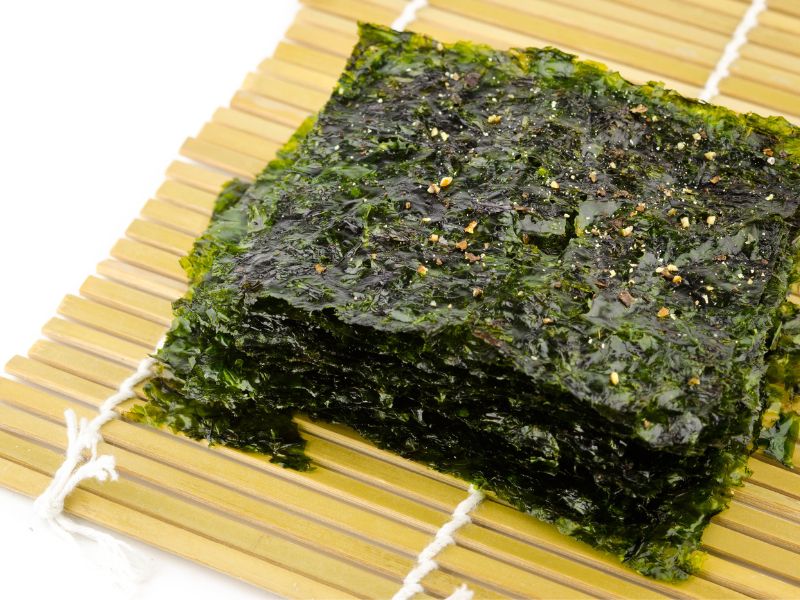 Nori, when eaten alone, has an almost bitter flavor but is also salty. By itself, it’s usually served as a dried snack, which gives it a slightly crunchy texture.

Nori is very effective at absorbing moisture, so when it’s used to prepare sushi, it will absorb the moisture from the rice, giving it a much more flexible and soft texture.

In the end, Nori has a slightly salty, almost metallic flavor. 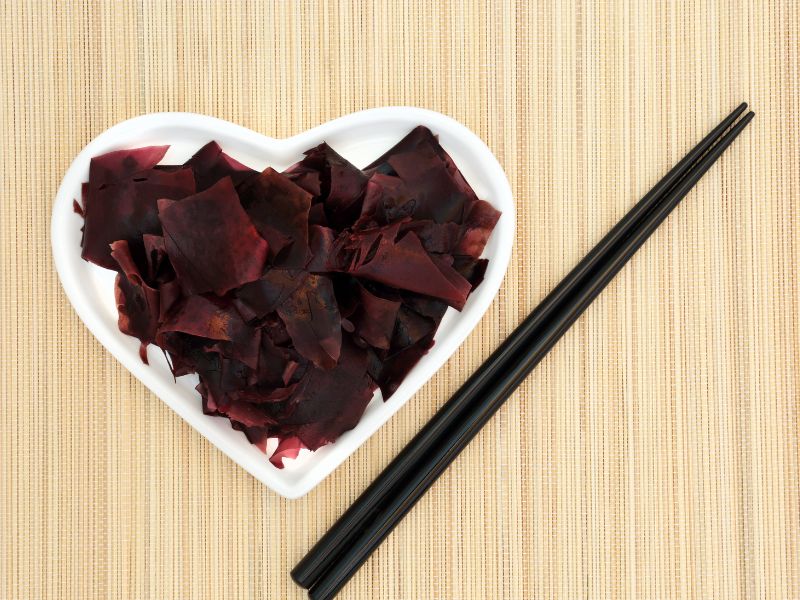 Dulse is a type of seaweed that is typically used in salads and sometimes as the main ingredient in soups. It has a very smoky flavor and can be very chewy, depending on the preparation.

This product has a salty and iodine-rich flavor.

Ways To Cook Seaweed & How It Affects Taste 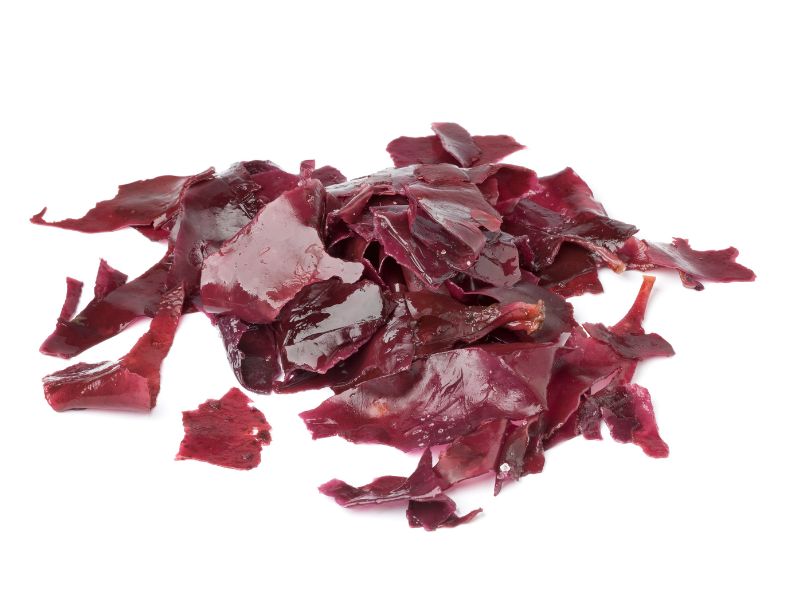 There are several ways to enjoy seaweed. Here are some of the most popular:

You can purchase this species of microalgae on its own as a snack. When sold this way, it usually has added salt to make it more enjoyable. Most of these snacks are a type of Nori.

In a snack like this, you can really taste the product on its own. In this preparation, it has a strong metallic, umami-rich flavor. It’s usually smooth but also very fibrous and dense.

What does seaweed taste like in a fermented snack?

Fermented seaweed, sometimes called Kelp Kraut, is a dish made from the original product but mixed with a starter culture that will react with the sugar compounds in the vegetables and algae.

This will lead to a chemical fermentation reaction that produces both alcohol and CO2. This can be ordered in restaurants, purchased, or done at home! If you choose to do it at home, make sure to take extra steps to prevent contamination.

In this dish, seaweed has a more intense flavor that’s more irony, salty, and intensely umami-flavored than the traditional option.

Dried seaweed is very crispy and gives a nice crunch! Once you chew it, it will soften and take on a texture similar to that of steamed spinach but more fibrous.

Dried sheets of it can be used as a garnish in soups because it has a rich, almost bitter flavor that compliments entrées well.

Sushi is a dish that originated in Japan and is a delicacy around the world. It can be customized with many different ingredients, and there are hundreds of types of sushi rolls that have been created.

The ingredients, typically seafood, raw fish, and a handful of vegetables, are laid on a bed of rice. The rice bed is set upon a sheet of sushi-grade seaweed. The rice and sushi are rolled around the ingredients until they make a uniform roll and are sliced.

The seaweed used in sushi is a special variety that will not rip when it’s rolled, and it has a strong salty and metallic flavor. It’s very rich and blends well with the flavors of the raw fish, vegetables, and other ingredients.

Still have questions? Let’s wrap up this guide with commonly asked questions regarding, “What does seaweed taste like?”.

No, it typically does not have a fishy taste or smell, despite being an aquatic product. If it has expired or has become contaminated, there could be a risk of a fishy smell.

Some people may assume that this type of microalgae has a fishy flavor because it’s typically served with fish, for example, in sushi, and in seafood entrées. Because of this popular pairing, many people think that seaweed will have a similar flavor to the fish that they associate it with.

However, it actually has a unique flavor that can be masked by fishy foods.

How can I try seaweed?

There are plenty of products that you can purchase if you’d like to try this delicacy! You can get plain or lightly salted seaweed snacks from your local grocery store or Asian market.

If you want to “try before you buy” per se, you can go to a restaurant that serves seaweed. Some good options for you if you want a taste of seaweed are:

In short, yes! The specific health properties of each type of seaweed will be different because there are differences between each species of microalgae.

Most types of seaweed contain a high amount of vitamins and minerals that are essential for your body. Adding seaweed to your diet is a good way to keep your immune system functioning well and your digestion regular.

Helpful vitamins and minerals include:

Can seaweed be unhealthy?

Unfortunately, the answer is also yes. After all, too much of anything can be harmful. Seaweed contains high amounts of iodine, which is helpful and essential in the human diet in certain amounts.

However, there can be consequences if you consume too much of it in a short amount of time. Iodine is good for thyroid health, but if too much is consumed, it can cause a thyroid condition requiring treatment.

There are a few regions of the world where the oceans are increasing in pollution to the point where traces of heavy metals can be found in aquatic life, such as some fish, shellfish, and even seaweed.

It’s always good to double-check where you’re sourcing your seaweed if you choose to enjoy this delicacy. A good rule of thumb is to get high-quality products. Anything with the label “sushi-grade” is typically the highest quality standard and will be safe for you to enjoy.

Seaweed is a wonderful food that many cultures throughout history have enjoyed. It’s a tasty snack, garnish, or meal. Since it’s a very interesting treat, it isn’t like any other product. Therefore, describing its taste is very difficult to do.

There are so many ways to prepare seaweed, from sushi to soups and salads to fermented snacks. Many popular dishes made with seaweed exist worldwide and in different cultures. This means that there are hundreds of dishes that you can try.

There is nothing else quite like seaweed, making it difficult to compare. In the end, we can best describe it as a salty, fibrous, chewy delicacy. The best way to determine taste is to try it and decide for yourself what it tastes like! 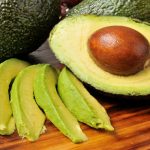 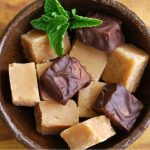 How to Reheat Salmon – A Quick Guide