Naan bread is packed with bold flavors and pairs well with other delicious foods. You’re missing out if you’ve never enjoyed trying out this tasty flatbread.

This versatile bread is perfect for spicy, sweet, or savory dishes. Additionally, it’s great to eat on its own with butter or a delicious nut-butter spread.

Want to discover what to eat with naan bread? Keep reading!

What is Naan Bread? 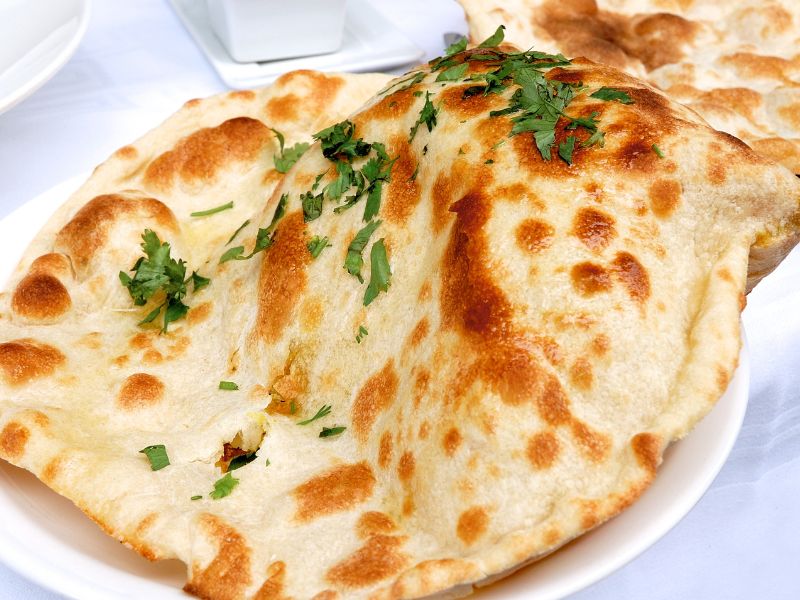 Naan bread is a popular form of oven-baked flatbread. It originates from Asian and Middle Eastern countries and has been around for centuries, with the first mention of it appearing in the work of poet Amir Khusrau in 1300 AD.

There are different forms of this flatbread, but Indian naan seems to be a favorite among Westerners. Indian naan has a deliciously rich taste because yogurt is usually used in the recipe.

In the past, naan was only enjoyed by wealthy royals who had the resources to enjoy it. However, as time passed, the tasty flatbread was available to families all over India through vendors.

Vendors had the special oven (called a tandoor oven) needed to bake the flatbread, so they could make it and sell it to families. The tandoor oven was usually made of clay and was about 3.3 feet tall, with most of it sunk into the ground.

Because families usually did not own a tandoor oven, many purchased the flatbread from vendors and brought it home instead of making it themselves.

Another reason many families would rather purchase the bread than make it at home was because of how long it took. At least four hours were needed to make naan from start to finish.

How is Naan Bread Made? 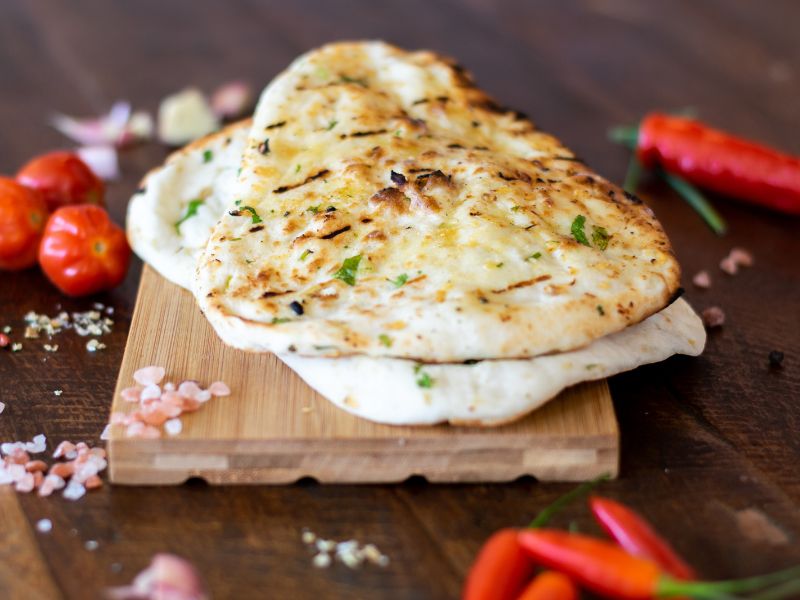 Like other types of bread created using yeast, naan needs time for the yeast to activate for the best results. This part of the process takes up at least half of the time of the process. If you’re interested in cooking from scratch when deciding what to eat with naan bread, here’s how it’s done.

Take the yeast and place it in a container of warm water to activate it. Usually, you will need to let the yeast sit in the warm water for around 10 to 15 minutes for it to activate.

Yeast is a form of fungi, and it’s used in many bread products and alcoholic beverages. Its use in foods and drinks can be traced back to Ancient Egypt and was popular for making beers and baked goods.

Yeast samples are still being discovered today in Egyptian artifacts and are even being used in baking bread by scientists who are amazed at the yeast’s resilience.

Once the yeast activates, you must add it to a dry mixture of flour, salt, and sugar. You could either use all-purpose flour or maida flour.

Maida flour is a white flour that comes from India. It’s usually made from wheat and can be used to create various baked goods. You can find maida flour in certain grocery stores and sometimes online.

After combining the yeast and dry ingredients, you can add the yogurt to the mixture. It’s recommended that you use plain non-fat yogurt to keep the recipe as close to traditional as possible.

You must begin kneading the dough immediately after adding the yogurt to the mixture. Make sure you knead the dough thoroughly to ensure everything gets evenly dispersed so that the dough becomes nice and elastic.

Take the dough and place it in a warm environment to allow it to rise. You will need to let it rise for around two hours.

Watching the leavening process can be an awe-inspiring experience and a great teachable moment for children to learn about yeast and how it works in creating baked goods.

After the dough rises, you need to separate it into small balls.

Take the balls and stretch them out into flat round shapes, then place the dough into a very hot, lightly oiled cast-iron frying pan. Cook on high heat for about a minute until large bubbles appear. Flip and cook for another 30-40 seconds.

Allow them to cool for a few minutes, and you’re ready to eat!

Nowadays, the process has been made much easier and quicker, and you can even purchase premade naan bread in supermarkets and online.

Top Foods to Enjoy with Naan 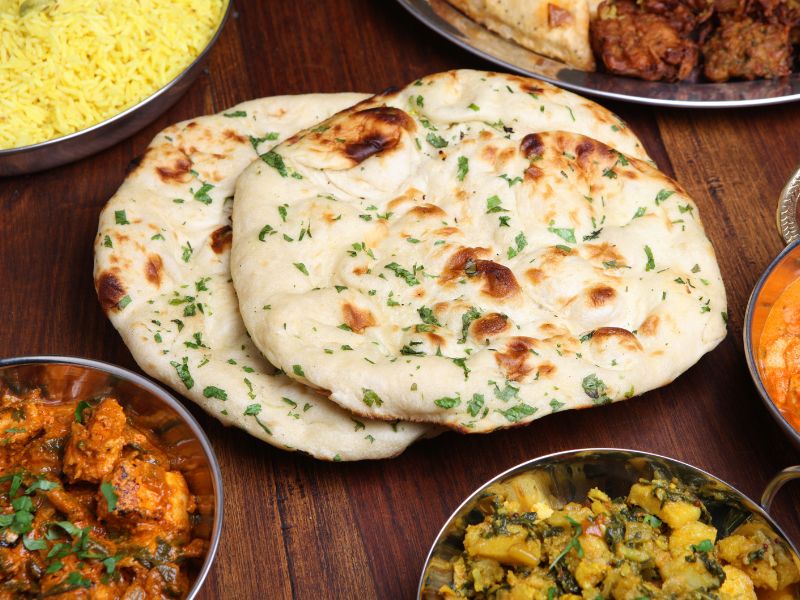 Naan is a seasoned flatbread and pairs well with a huge variety of foods.

Below are some top recommendations for what to eat with naan bread.

What better dish to eat with this delicious flatbread than savory curry?

Curry comes in various flavors, and nearly anything could be used to create the dish. However, meat, starches, and spices are typically combined to create this savory treat. Make it as spicy or as mild as your heart desires.

Indian curry is especially tasty when combined with naan. It also pairs beautifully with Bangladeshi curries, whose descendants are often served under the moniker “Indian curries” in Western countries. You can dip the flatbread in the curry or place a spoonful on top!

Hummus, a Middle Eastern dip/spread popular around the globe for its smooth, creamy texture and flavor, pairs wonderfully with traditional Indian flatbread.

You can purchase hummus from your local grocery store or make some yourself at home.

Of course, homemade hummus will always taste better. With its main ingredients being chickpeas, tahini, olive oil, and spices, it shouldn’t be too difficult to make your own hummus. Spread it onto the naan or dip it in like chips for a quick, satisfying snack.

Naan would be especially tasty with savory grilled meats.

Whether chicken, beef, pork, or lamb, each protein-packed meat can be shredded and placed on top of the flatbread. You could also make a delicious wrap if you add other toppings inside and wrap the bread around it.

Eat the wrap as an easy meal on the go or at a friendly neighborhood barbecue with relatives and friends. 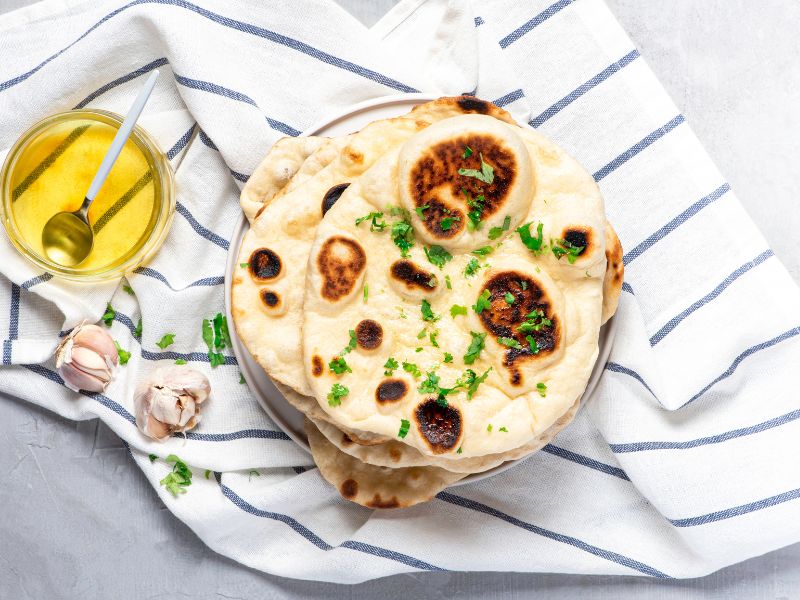 The tomato soup’s smooth, creamy texture will complement the flatbread’s light, flaky texture. If you want to mimic a grilled cheese, you could top your soup or flatbread with shredded cheddar or mozzarella.

Another way you could enjoy the pairing would be to crumble the naan and place it into the soup.

Eggs go well with naan because they add creaminess to the baked good.

Serve the eggs sunny-side-up with bacon on top of the flatbread or dip it into the yoke. Crumble the naan in the eggs or create an egg wrap for an easy breakfast treat the whole family will love.

For lunch, you may want to enjoy the bread with some egg salad or an omelet for a protein-rich meal.

If you’re wondering what to eat with naan bread, you may be surprised to learn that it’s not just a savory dish. Adding ice cream to naan could be a phenomenal combination for anyone with a sweet tooth!

Some people mold the naan flatbread into a cone shape and place a scoop of creamy ice cream on top for a fun dessert. If you want it to be extra sweet, add cinnamon sugar to the cone!

If you want to continue the Indian-inspired theme, you could use kulfi (an Indian creamy frozen confection) instead of western ice cream. Kulfi is thicker, richer, and creamier than western ice cream, so it would be delightful to enjoy with naan.

Either way, children and adults alike will enjoy this treat, especially when delightful toppings are added.

For example, you could top your naan and ice cream with the following:

Naan has a rich flavor and history and is enjoyed by people worldwide today. Knowing what to eat with naan bread is partly just a matter of personal preference – flatbreads pair with almost any food.

While the process and methods of making this yummy flatbread have been altered over the years, its value hasn’t. Whether you’re baking at home or buying it from the store, there are so many ways to enjoy naan bread! 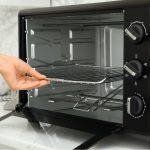 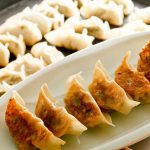 What to Eat with Sourdough Bread