A variety of different social, economic and cultural conditions were responsible for the interest in gastronomy in nineteenth century France. This interest (in gastronomy) contributed to the emergence of gastronomic writing, which not only fed from, but also fueled and became an integral part of this new 19thcentury trend.

Alexandre Grimod de la Reynière’s Almanach des gourmands was perhaps the most influential and important piece of gastronomic writing in France in the 19th century. Starting in 1803 it went through eight printings by the year 1812. It in turn led to the publication of Cours gastronomique by Charles Louis Badet de Gassicourt. Grimond established a criticism of cooking at the same time others were writing criticisms of art, literature and drama. (Ory, 1997)

Grimond combined the three literatures: the profession, the science, and the art. From ‘the profession’ he wrote recipes in a didactic and technical tone, from the science he commented on hygiene and the astringency of foods, and from the art he took eloquence. (Ory, 1997)

These written communications linked together producers, suppliers and consumers. It created social thinking about food. Foodstuffs became more readily available due to an abundant economy and people started to discuss food as a topic worthy of a high social status. (Ferguson, 2004)

One of the greatest changes that allowed this to happen was the follow on from the introduction of service a la ruse. Restaurants became wide spread and food and dining had moved from being a private ritual to that of a public one. In the late 18th century there were a few hundred restaurants in Paris. By the 1820’s there were over three thousand. These restaurants catered for a variety of social demographics and offered a wide range of culinary choice. (Ferguson, 2004)

Parisians became wealthier and there was an increase in the upper middle class. A greater variety of produce was able to be transported greater distances and there was a shift in agriculture from something seen as a subsistence practice to that of a more commercial one. (Ferguson, 2004)

Brillat-Savarin spoke of the Parisian meal being a ‘cosmopolitan whole.’ In the 16th century food came from all over France but in the 19th century when dining in Paris was spoken about, it was often with reference to different parts of Europe, Africa, America and Asia. (Ory, 1997)

Grimod de la Reynière attributed the success of his books not only to his gift with words but also to being in the right place at the right time. For it was at this turn of the 19th Century that

those who had benefited from the Revolution in financial terms often lacked the social graces of the class to which they aspired and therefore needed guidance. (Ory, 1997)

It was this increase in affluence of the lower classes that pushed or saw the surge in gastronomic literature. People had the money and could afford the goods but lacked the knowledge. There was a market for knowledge.

Similar conditions in western societies today have seen a renewed interest in gastronomy and gastronomic media.

The Internet has been a huge driving power for this movement. Food blogging is now an amateur pastime for many (as was the writing of light verse in the 1800’s).

People blog, twitter and instagram their meals. Apps like foursquare allow individuals to socially promote themselves to their peers by boasting about the restaurant or café they are in. To differentiate themselves from the mainstream, people search for a way to improve their knowledge. Universities offer courses in Gastronomy, and food (and drink) niches become explored more fully – sometimes to the point of absurdity. Resurgences in things like the eating of offal, now coined ‘nose to tail dining’ take the limelight in expensive yet ‘non formal’ restaurants. A wide range of produce is available all year irrespective of seasons and in places like Australia (due to a resource boom) there is a growing upper middle class. (Snow, 2013)

Human beings have a need to be curious of other cultures – it satisfies needs that are related to our status and prestige according to Maslow’s Hierarchy. (Tikkanen, 2007)

In Australia this increased awareness and interest in other cultures combined with the country’s already multicultural population has also exploded into a ubiquitous array of cuisines.

A cuisine is one of the most distinctive expressions of an ethnic group, or in modern times a nation. (Ory, 1997)

Mass media has honed in on this, and of course, through the media this societal gastronomic effect has snowballed. The social class known to many Australians as “bogans” have become “cashed up bogans.” This combined with Australia’s egalitarian culture and the democracy of producing content via the internet, has given rise to a whole new breed of gastronomic writers and/or content producers. The biggest question now is – will this social ‘gastronomic’ trend (if indeed it can be described as that) last or will it morph into something entirely different.

Ferguson, P. (2004). Accounting for Taste: The triumph of French cuisine. Chicago: The University of Chicago Press. 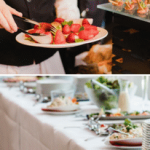 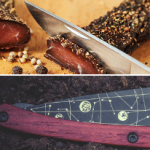 Customize Your Deejo Pocket Knife To Look Just Like Your Kitchen