In the 19thnineteenth century in Western Europe particularly France, the way the higher social classes dined changed dramatically. There was movement away from the dining style of Service à la française into a more diner friendly style of service known as Service à la russe. This gradual change is of gastronomic significance in that it altered the way society perceived food and the role of the cook who also at that time became known as the Chef.

Service à la Française started in the 17th century and evolved over the next 150 years as an elegant display of self worth. (Ottomeyer 1998)

It often consisted of three or more courses of dishes, which were laid out on tables before diners were seated. Service à la française was used to define a host’s social status with an elaborate array of various dishes often exceeding the number of guests. 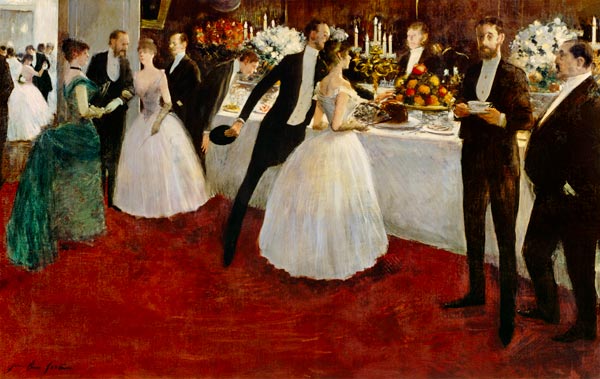 The table layout was dominated by a surtout, a flamboyant structure that often took up the entire centre of the table. An assortment of dishes were then placed symmetrically down either side of this at intervals that ensured even distance between any two of a kind. (Kaufman 2002)

It was the duty of the maître de hotel (not the cook) to consult with the host, prepare the menu, manage the kitchen and lay the table. The diners would arrive to a table already full of food and once seated the interruption of diners by servants was kept to a minimum.

Service à la française was a communal affair with people sharing dishes and adding side dishes to individual plates. The host played an important, if somewhat pretentious role and would often serve soup, carve and serve roasts, as well as explain and recommend dishes.

There was however one great disadvantage to this style of service and that was that the food often became cold before it was time for the diners to eat.

This objection, it must be admitted, is very serious; it merits the attentions of amphitryons as well as cooks. Isn’t it regrettable, in effect, that on a table splendidly served, where no expense is spared to flatter the taste and the desires of the guests one eats dishes that have cooled down or lost something of their essential qualities?    (Urbain Dubois in Kaufman, p 125)

Even though it had already been discussed some 50 years before, it did not really come to prevail in France until the latter half of the nineteenth century.

Now instead of the hot meals, such as roasts, being prepared before hand and laying on the table in wait, they were prepared, carved and plated in the kitchen and sent out to each diner whilst still hot, similar to a Western style restaurant today. 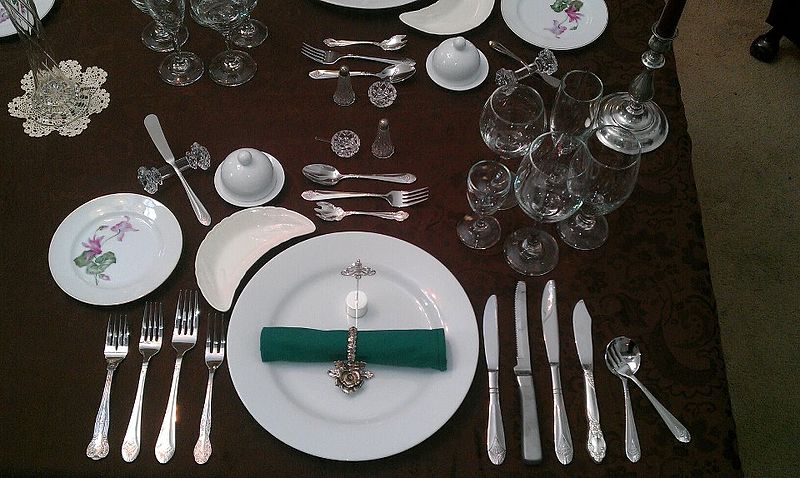 Flavour took precedence over aesthetic qualities. The focus went from the maître de hotel (a la francaise) to that of the chef or cook. Cooks moved from a secondary to a primary role and also had to acquire new skills for portioning and presenting plates of food. Service à la russe also saw the introduction of the term chef de cuisine as opposed to the term cuisiner. (Kaufman 2002)

Written menus became necessary and the description of dishes had to be conveyed through writing as opposed to the way they looked. Diners now had choice; as for each course there was often an option to choose from two different meals. (Kaufman 2002)

Dishes were plated in the kitchen and this required more service staff, the amount of food for each course became smaller but the number of courses increased. Service à la russe also meant meals were no longer shared.

Courses increased, as did the number of servers needed for each meal. Dinner hours were longer; instead of two or three, it took four or more. (Kirwan, AV 1864)

Diners were served as equal, no longer did the best cut of meat go to only one person. This combined with the choice of dishes on a menu may over time have contributed to a more egalitarian society. This shift in dining and service also meant that individual cuts of meat were more sought after by chefs as opposed to whole animals. Instead of a 3 whole birds, 12 diners were now served 12 breasts or thighs. Service à la russe may well have contributed to the way society purchases and consumes meat today.

Service à la russe saw the role of the diner move from the creator (choosing their own foods from the table to construct a plate) to that of the receiver. The chef was the new entertainer and the diners were the audience. Instead of eating together as a means of socializing or communion, dining for the diner turned into being about dinner!

This has escalated to a point today where chefs are perceived as super stars and degustation or tasting menus with matching wines are ubiquitous in many areas of modern style dining.

Just as the introduction of Service à la russe in the late 19th Century saw diners become more focused on food, a similar change is also happening now. The Internet has made information about food more readily available, mobile phones photograph and document meals, online blogs have turned diners into critics and a chef on You-tube can teach you how to cook a steak.

So what has this all come to? People are becoming more involved regarding food, they are more food conscious-  but is it being taken too far? Has the power of the customer overtaken that of the chef or has it always been like this?

Jason lives in Osaka Japan and has an infatuation with raw fish, ninjas and sake. Originally from Australia he has a Masters in Communications and a Le Cordon Bleu Masters of Gastronomic Tourism. He also owns a very old Nintendo.
E-mail » Web » Twitter » G+ »